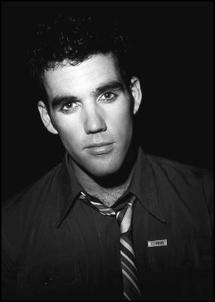 Taane Mete and Taiaroa Royal are two of New Zealand's most respected dance professionals. Together, they have assembled a team who will support them in the creation of this work with choreography by Taane Mete, Taiaroa Royal and Upbeat's guest Ross McCormack (pictured).

The play's music is composed by Eden Mulholland, with design by John Verryt, Elizabeth Whiting, Paul O’Brien and Michael Hodgson.

The play is a poetic account of love and loss and one man’s journey out to the edge of grief. Peter Vere-Jones features in a bravura performance as Prospero, a man in his late sixties who struggles to come to terms with the death of his wife along with a strong cast including Miranda Harcourt, Fleur Saville, SohieHambleton, Davida McKenzie, Thomasin McKenzie, Richard Chapman, Hugh McLaughlin, Anya Tate-Manning, and Ricky Dey.

And finally on Upbeat, Polish-born pianist Dr Anna Kijanowska talks about her trio of talent appearing in the local Polish Association’s quake fundraising concert, Ode to Joy this Saturday.

Polish-born flautist Adrianna Lis performs an original Anthony Ritchie composition while Anna, who has come from the US, lends her support. Olga Gryniewicz, a Wellington-based soprano, will accompany them in the concert featuring work by Chopin, Beethoven, Schubert, Saint-Saëns and Szymanowski.