Written at Te Henga on the west coast of Auckland, this is a reflective piece which contemplates light, distance, long horizons, happiness, emptiness, yearning: images of a far off glimmering sea or sky. The images are not intended to be programmatic but to evoke various inner states of being. I also like the word glimmer as it combines the words glimpse and shimmer, and the word blue which can be melancholic or 'sunny' (as in sky blue).

'Glimmer of Blue' was written in 2005 for my players in the former Waitakere City Orchestra, and vibraphone soloist Hazel Leader. It was premiered that year, and performed again in 2006 for the opening of the Waitakere City Council chambers - by special request from former mayor Sir Bob Harvey - and then for a 3rd time in 2011 in the Glen Eden Playhouse Theatre in West Auckland. All performances were conducted by the composer who was at the time, Music Director of the WCO. 'Glimmer of Blue' is dedicated to a close friend, Tyl von Randow, who has generously enabled many happy hours of composing at his residence at Te Henga. 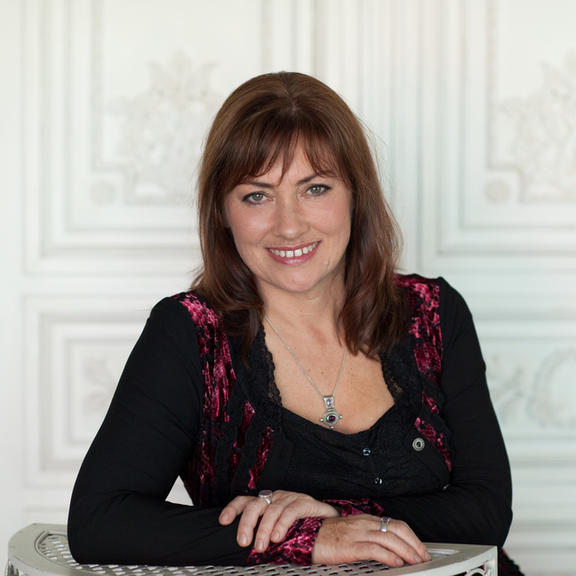 Brigid Ursula Bisley is a composer, conductor and music educator. She is also founder of the Titirangi Chamber Choir (2018- ) and the former Waitakere Orchestra (2003-2013) in West Auckland. A graduate of the Auckland University School of Music, she studied violin performance and composition. From 1994-1998 she studied conducting privately with Maestro Eliano Mattiozzi Petralia, an Italian conductor then resident in Auckland, who encouraged her to pursue conducting as a career; and since 2002, from Emeritus Professor Uwe Grodd from the Auckland University School of Music, who has also been her mentor.

As a composer she has written works for voice, cello, piano, chamber ensembles, orchestra, film and contemporary dance. Her works have been performed in NZ and abroad. She has earned outstanding praise for her work as a musician and entrepreneur in her local community, and in 2006 was awarded the Infratil Special Award for Art and Culture in recognition of her outstanding voluntary service to the community of Waitakere City. In 2006 her 'Waitakere Overture' was commissioned by former Mayor Sir Bob Harvey for the opening of the new council chambers, and was premiered by the Waitakere Orchestra and conducted by the composer, along with another work, 'Glimmer of Blue'.

Brigid is passionately committed to the evolving culture of NZ, to generating artist collaboration and community music-making, and to improving music education. She is very involved with her local community of artists including musicians, poets and film makers in Titirangi where she resides.