When I approached this piece I had an image in my mind of an iced-over lake, its scarred surface stretched over blue water. Forms are pressed up against each other like agate: the chilled water and air; a stinging breeze brushing the overlapping etchings on the surface, as from an ice skater’s blade. Water below struggles against its ceiling, waiting for the melt to begin. 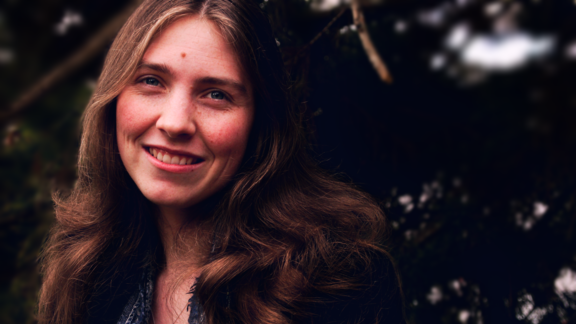 Kirsten Strom is a young composer, conductor and creative writer. Born in New Zealand, she spent her youth in three continents before returning to Auckland. In 2017 she was named the 2018 Young Composer-in-Residence with the Auckland Philharmonia Orchestra. Her commission 'Wake-Up Call' for orchestra and smartphones received enthusiastic responses under the deft batons of Ray Chan and Tianyi Lu. Another orchestral work 'Ice' won Orchestra’s Choice Award in the Todd-NZSO Young Composers Awards 2017, aired nationally on radio. Her choral work 'Ktisis' was premiered by Taipei Chamber Singers in the Asian Composers League Festival Taiwan 2018.

She also has experience with devising and performing live electronics works. In 2018 she was an artist-in-residence for the Estalagem Live Electronics Residency in Madeira. Her work 'WAVEring Lines' was premiered in 2015 and recorded in 2017 by gifted pianist Bradley Wood and producer Irazema Vera.

Her music has been played by chamber groups like Aroha String Quartet who recorded her piece 'Purity' in 2015, and Antipodes Percussion Project, winning the Suitcase Percussion Competition and Audience Choice Award with 'Time is Money' for coins. A graduate of the University of Auckland, she is currently studying for her Masters at the Royal Academy of Music, London.