Unlike many New Zealand artists of the time, Petrus Van der Velden became consumed – almost obsessed – by a single subject: a mountain stream at Otira. He painted it no fewer than eleven times between 1891 and 1893 in a range of sizes and exploring variations in the flow of water, rocks, skyline, forest, tone and colours. 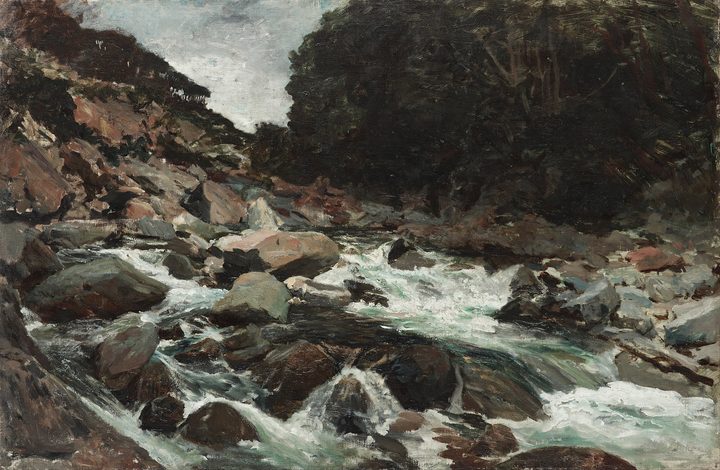 “When the thunder rolled, and the wind howled, and the rain poured Van der Velden would go into the Gorge, whereas... when the sun shone from a cloudless sky, he would lie with his back to the grass near the hotel and sleep.”

'Otira Gorge' is inspired by a painting by Petrus Van der Velden held in the collection of the Auckland Art Gallery.

Van der Velden’s 'Otira Gorge' is painted with heavy, thick brush strokes and dark colours, and is evocative and turbulent. As well as reflecting the natural elements depicted in Van der Velden’s work, I explored the dramatic force of the original painting using the rich timbral medium of the orchestra. (Chris Adams)

Chris Adams (1979-) is a New Zealand composer and Head of Music at King’s College, Auckland. He was the Mozart Fellow (2010-2011) at the University of Otago and the Auckland Philharmonia’s Composer in Residence (2009). Chris was the inaugural University of Otago Wallace Arts Trust Artist in Residence at the Pah Homestead from July to September, 2010, a position he held again in 2011.

Chris has had works commissioned and performed by a wide variety of groups including the New Zealand Symphony Orchestra, NZTrio, Auckland Philharmonia, Ensemble Kochi (Tokyo), Auckland Chamber Orchestra, Jade String Quartet (Auckland), and Southern Sinfonia (Dunedin). His works have been performed around New Zealand and in Australia, Britain, Hong Kong, Italy, and Vietnam. Composition awards include the Philip Neill Memorial Prize (2008), for his string quartet, Persephone.

Recorded by RNZ Concert for the 2018 NZ Composer Sessions