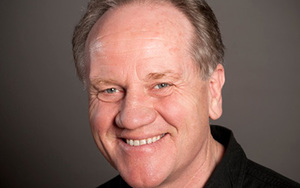 Kenneth Young explains the background to this work:

During my teenage years I was a member of the National Youth Brass Band. One of the friendships I maintained long afterwards was with Riki McDonnell, New Zealand’s most successful soloist in the brass band movement.

He played many different instruments during the years but eventually settled firmly on the euphonium, an instrument I used to play myself and which is certainly my favourite brass instrument.

Riki would occasionally join me in the ranks of the NZSO performing the tenor tuba parts of works such as Holst’s The Planets and Strauss’s Ein Heldenleben. The first work I wrote for him was a short piece for eupho and piano called Reverie. But I’d always harboured a desire to write a full concerto with orchestra.

Riki was aware of this and so when he was invited to perform at a Tuba and Euphonium Symposium in Budapest in 2004 he commissioned me to write him a concerto for the occasion.

The concerto is in four movements, unashamedly lyrical and is dedicated to Riki McDonnell.

Recorded by RNZ Concert as part of the 2012 NZSO-RNZ Concert-SOUNZ Recordings.