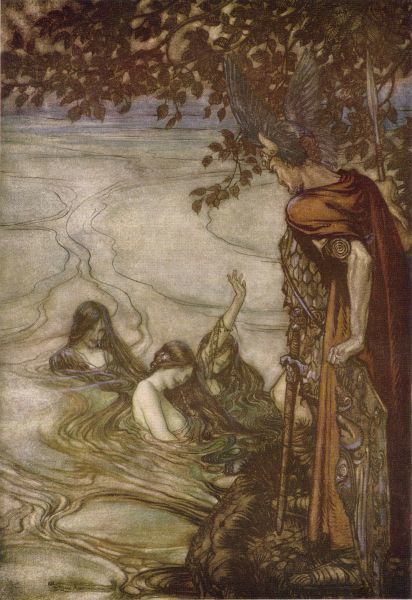 From the utter darkness of its opening bass E-flat, sustained over 163 bars, the beginning of Wagner’s Rheingold rises to a glorious radiance speaking of the creation of a vast new world.

Throughout all the long and tangled strands of 'The Ring Cycle', the thing to remember is that the waters of the Rhine, representing all that is good and joyful and natural and innocent, is the beginning place.

The whole drama swings on the struggles between those who want this joy and peace to return, and those who will destroy it with their greed, pride and political ambition.

Even the Rhinegold in its unformed state is simply a beautiful thing, admired by the Rhinemaidens as a natural wonder.

Erica Challis takes us through the story and music of the first of Wagner's epic four 'Ring Cycle' operas.

In opera number three, we meet a new hero, Siegfried, son of the human lovers we met before, Siegmund and Sieglinde.

How will the Ring shape his fate?

Right through the events of The Valkyrie, the Ring has waited, guarded by the giant Fafner, now transformed into a dragon. He does nothing with it, content to include it in a treasure hoard along with the magical Tarnhelm.

This is where Siegfried opens – in a dark world of purposeful brooding – which is what this first motif on the bassoons is called. The tuba announces one of the themes of Nibelheim, filled with resentment and menace.

Nothing more would happen if left to Fafner, sulking on his pile of gold. But soon an active rhythm will cue us in to the main character making plans to get the Ring: the Nibelung smith Mime, brother of Alberich who first stole the Ring from the Rhinemaidens.

Continuing the epic journey, Erica Challis takes us through the story and music of the third of Wagner's four Ring Cycle operas.

We reach the twilight of the gods, as Erica Challis takes us through fourth and final of the Wagner's 'Ring Cycle' operas.

Götterdämmerung opens with a prologue recalling the events shown in the previous operas. We are filled in on the state of affairs by a trio of nature spirits, the Norns, as they sit weaving their thread of fate and prophecy.

Wotan, king of the gods, has been a central character in the preceding operas and he is attempting to keep the powerful magic Ring out of the hands of the evil dwarf Alberich, who would use it to enslave the world. Wotan wants a world where power is bound by laws. Alberich opposes this.

However Wotan has broken his own contracts in the course of seizing and then losing the Ring. He needs to retrieve it  without becoming directly involved. So he creates a race of heroes to regain the Ring for him: first Siegmund, who was cast aside for being merely an agent of Wotan’s will and then Siegmund’s son Siegfried, an unplanned development.

Wotan believes Siegfried may become the hero who will win back the Ring out of his own free will, unassisted by Wotan. He hopes Siegfried may found a noble race who will rule the world with justice.

Siegfried certainly has a worthy consort with whom to begin that race of heroes. He rescued Wotan’s daughter, the former Valkyrie Brunnhilde, from her enchanted sleep within a ring of magic fire.