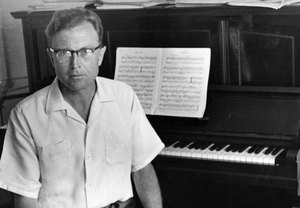 Douglas Lilburn was born in Wanganui in 1915. After studies at Canterbury University College, he went on to the Royal College of Music, London, in 1937, where he was tutored in composition by Ralph Vaughan Williams. He returned to New Zealand in 1940, and worked as a freelance composer and teacher in Christchurch until 1947. Between 1946 and 1949 and again in 1951, Lilburn was Composer-in-Residence at the Cambridge Summer Music Schools. In 1947 Douglas Lilburn shifted to Wellington to take up a position at Victoria University, where he stayed for the rest of his career. In 1963 he was made Associate Professor of Music and was appointed Professor with a personal chair in Music in 1970. In 1966 Lilburn founded the Electronic Music Studio at the university and was its Director until 1979, a year before his retirement. As a teacher, he had a lasting influence on subsequent generations of New Zealand composers, coming to be known as the ‘grandfather of New Zealand music’. Composed in 1936, 'Forest' was one of Lilburn’s earliest significant compositions. It won a competition initiated by Percy Grainger for an orchestral piece projecting ‘New Zealand cultural and emotional characteristics.’ The work is a tone poem for orchestra, depicting autumn at Mount Peel in South Canterbury. According to the musicologist Robert Hoskins, ‘we hear Lilburn tracking Sibelius through the shadowy woods, keeping his own distance, but measuring his own hesitancy until he takes his own road.’