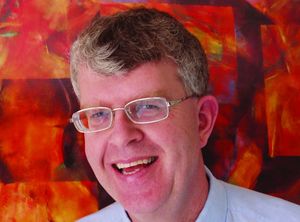 Composer and choral conductor David Hamilton has been commissioned by major instrumental groups choirs throughout New Zealand, and his music is particularly popular with school choirs. Until 2001, Hamilton was Head of Music at Epsom Girls Grammar School (Auckland), and he is currently the Deputy Music Director of Auckland Choral. His works have been performed, published and recorded in a number of places around the world, with commissions from choirs in Japan, England, USA and Finland.

'Elysian Fields' was commissioned by the Auckland Youth Orchestra, for their 50th anniversary in 1998. According to the composer, the title refers to the classical Greek afterlife, and the idea of a state of perfect happiness. The music is a re-working of an existing piece of music in a type of inverted variation form: in this case the source material is the hymn tune ‘St Elizabeth’. All the musical material is derived from the hymn’s melody and harmony, building up to a statement of the material in its original form towards the end of the piece.