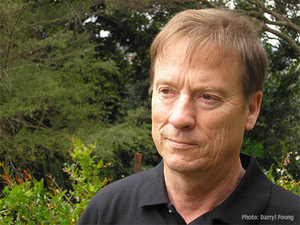 John Elmsly was born in Auckland on 1 July 1952. A graduate in mathematics and music from Victoria University of Wellington, he studied piano with Barry Margan, composition with David Farquhar, and began electronic music with Douglas Lilburn. From 1975 to 1978 he held a post-graduate scholarship from the Belgian Ministry of Culture. In 1977 he was awarded a First Prize in Composition by the Royal Conservatory of Brussels, where he studied with Victor Legley, and in 1978 continued study in Liège with Henri Pousseur, Philippe Boesmans and Frederic Rzewski. In 1981 he was awarded Mozart Fellowship at University of Otago in Dunedin, and in 1984 he was appointed lecturer in composition at the School of Music, University of Auckland where he was Associate-Professor and head of composition and director of the Karlheinz Company contemporary music ensemble until 2015. In 2015–2016 he was Te Kōkī New Zealand School of Music’s Creative New Zealand/Jack C. Richards Composer-in-Residence.

'Intoit' was commissioned by the Auckland Philharmonia Orchestra in 1990, and first performed in a subscription series as part of a series of fanfares commissioned from twelve Auckland composers. John writes, ‘It is in the nature of a greeting prelude, with sounds of welcome from the orchestra: a summoning and gathering. There are hints of the Pacific in the music, in the melody, the simple rhythmic games and the percussion sounds, and the musical language is a celebration of things I find attractive about tonality. All of the music is built from a short melody which is viewed from several angles before a vigorous conclusion.’