Robert BURCH: Essay to the Memory of Dmitri Shostakovich 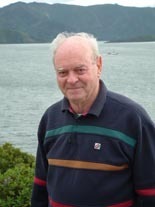 Robert William (Bob) Burch (1929 – 2007) studied under Frederick Page and Douglas Lilburn at Victoria University, graduating in 1950. The following year he moved to London to study at composition and horn at the Guildhall School with Benjamin Frankel and Raymond Bryant of the BBC Symphony. Burch returned to New Zealand in 1953 where he joined the New Zealand Symphony Orchestra as second horn, and held the same chair for 34 years.