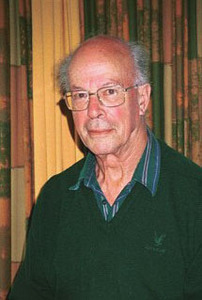 David Farquhar was born in Cambridge, New Zealand in 1928 but spent most of his early years in Fiji. He was educated in New Zealand and began his university studies in Christchurch before completing his degree at Victoria University in Wellington where he studied with Douglas Lilburn. He taught briefly at St Peters School, Cambridge, before going to Britain where he completed an MA at Cambridge University, and also studied composition with Benjamin Frankel at the Guildhall School of Music in London.

On his return to New Zealand he joined the staff of the Department of Music at Victoria University, and was made Professor of Music in 1976, retiring in 1993. He was the Founder-President of the Composers’ Association of New Zealand in 1974 and was awarded their Citation for Services to New Zealand Music in 1984. From 1982 – 1995 he was a member of the Board of the New Zealand Composers’ Foundation and is a Trustee of the Centre for New Zealand Music. In 2004 he was made a Companion of the New Zealand Order of Merit for his services to music. He has written numerous orchestral, choral, stage and instrumental works, songs and music for children, and has been recognised since the 1950s as being at the forefront of New Zealand composition.

An Epithalamion is a poem in honour of the bride, dating back to Roman times. Farquhar’s Epithalamion Overture is dedicated to his wife, Raydia, a fine visual artist and poet. This is one of Farquhar’s earlier works, and the influence of composers such as Britten and Bartok can be heard, particularly in his use of bitonal harmony. Farquhar would have heard many performances of these composers’ works during his studies in England. This RNZ recording dates back to 1966, featuring the Alex Lindsay String Orchestra with the composer David Farquhar at the podium.

Five Canons for Two Clarinets was written in the 1950’s when the composer was a student at Cambridge University. The first performance was given by fellow students including Stanley Sadie who later became the editor of the New Grove Dictionary of Music. All five movements are strict canons in the sense that the two voices (clarinets) play the same music beginning at different times. The voices also differ in pitch by intervals based on thirds and sixths. Five Canons for Two Clarinets was recorded in 2015 by NZSO clarinetists Patrick Barry and Rachel Vernon for the Resound Project.