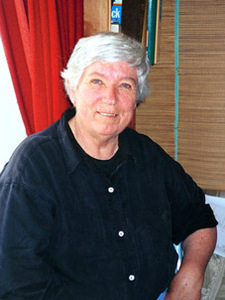 Born in Wellington in 1941, Jenny McLeod grew up in Timaru and Levin. She enrolled at Victoria University in 1961, studying music with Frederick Page, David Farquhar and Douglas Lilburn. After hearing a recording of Quartet for the End of Time, McLeod resolved to go to Paris to study with Messiaen, whose generous mentorship made a lasting impression on her and resulted in a life-long friendship. After Paris, she moved on to study with Boulez in Basel, and then with Stockhausen and Berio in Cologne, where she wrote For Seven (1966). In 1971 she was appointed Professor at Victoria University, remarkable on two counts – as a woman and as being just twenty-nine years old.

In 1987 she met the Dutch composer Peter Schat, who introduced her to his “Tone Clock” theory. McLeod became fascinated with this new systematic classification of triads, and immersed herself in a study of its theory and applications, and composed 'Tone Clock Pieces for piano' (1988-89). In 1993 a new direction was set by 'He Iwi Kotahi Tatou' for Maori and Pakeha choirs, the beginning of a close association with Maori culture.

McLeod says about her piece: The 'Little Symphony' was written in 1963 when I was still a third-year B.Mus. student in the Victoria University of Wellington Music Department. Stravinsky's 'Symphony in C' was one of our music history set works that year, and while studying this I thought to myself, 'I can do one of these'. So I did. It was first performed in January 1964 by the orchestra at the annual St Peter's Cambridge Summer Music School under Georg Tintner, and has over the years been played a number of times - by most of New Zealand’s regional orchestras, and by the New Zealand Symphony Orchestra.