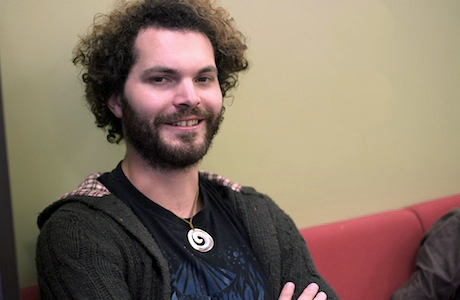 Simon Eastwood has had compositions performed by Franck Ollu, CHROMA, Christopher Redgate, and The BBC Singers, in addition to having a new piece premiered in the Spitalfields Music Winter Festival.  In 2009, Simon’s work The Spindle of Necessity was chosen to represent New Zealand at the Asian Composer’s League Festival in Korea. Simon gained a BMus from the New Zealand School of music in Wellington with first class honours in 2008 with majors in both composition and double bass, and in 2010, he travelled to London to study with David Sawer and Sir Peter Maxwell Davies at the Royal Academy of Music.  He is currently active as a composer in London.

The initial inspiration for 'Aurum' came from a 1976 Bridget Riley painting of the same name. The composer was fascinated by the vibrant interplay of colour displayed in the painting, with wavy lines of bright yellow and white set against darker shades of blue. Each line appeared clear and separate, yet from a distance they would all merge into one luminescent texture. Eastwood says "The word ‘aurum’ itself means gold, and therefore evokes images of brightness, brilliance and wealth, but looking at Riley’s painting I noticed a darker layer that seemed to seep up from beneath the brilliance, perhaps portraying a darker side to this precious metal."