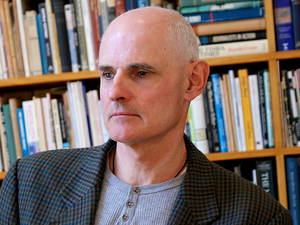 Peter Adams is an Associate Professor in the Music Department of Otago University and a well-known conductor. He was educated in Dunedin, completing a B.Mus with 1st class Honours in 1981 at Otago University majoring in composition, conducting and clarinet performance. A Commonwealth Scholarship took him to London and King’s College where he completed a M.Mus in Theory and Analysis. Since returning to Dunedin to take up his post at the university, Peter has built up a fine reputation as a conductor and musical director working all around New Zealand.

'Sonata for Clarinet and Viola' was recorded in 2014 by Rachel Vernon (clarinet) and Peter Barber (viola) for the Resound Project Phase 2. Adams says about this work: "It's odd looking back at a piece from so long ago - and in a musical language very much of its time. It has a lot of the intensity and Quixotic mood and dynamic changes of the English 1980's school of Maxwell Davies, Alexander Goehr etc. There is constant motivic permutation going on throughout and also a recurring refrain/cadence figure. The premiere performance was given at New Zealand House, London in 1984 by Rachel Nicholson (clarinet) and John Rogers (viola).  Rachel and John were good friends who had both played in the NZ National Youth Orchestra with me. I was thrilled that Rachel would revisit the piece – as I did – in 2014 for this RNZ Resound recording."