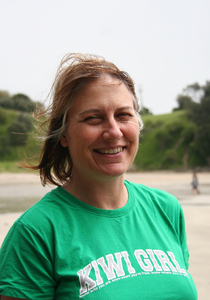 Glenda’s primary research area is the study of New Zealand music. She is closely connected to the New Zealand composing community, having served six years as Secretary of the Composers Association of New Zealand (CANZ), and since 2007 she has been President of that Association. Her compositions have been performed in New Zealand and abroad, and she has represented New Zealand at international festivals in Asia and Europe. Glenda has held positions as lecturer at the University of Auckland (1995-2006) and Senior Lecturer and Programme Director for Music at Unitec, Auckland. She has recently been appointed Associate Professor and Head of Music at the University of Canterbury.

The title 'Bite' reflects a number of layers of 'meaning' in this work, images such as the ‘bite’ of the bass clarinettist on the reed, the cellist’s bow biting into the string, and some crockery resonances in the tape part to name but three.  A high level of tension through the near-coincident rhythms in the instrumental parts is required, and the few melodic strands are quickly abandoned, frustrated.  A sense of acceptance, of resignation, and some inevitability, enfolds the ending.