‘Amalia & Friends’ is a series of concerts to celebrate the return of live music, and the important place it has in all our lives, after the Covid-19 lockdown. 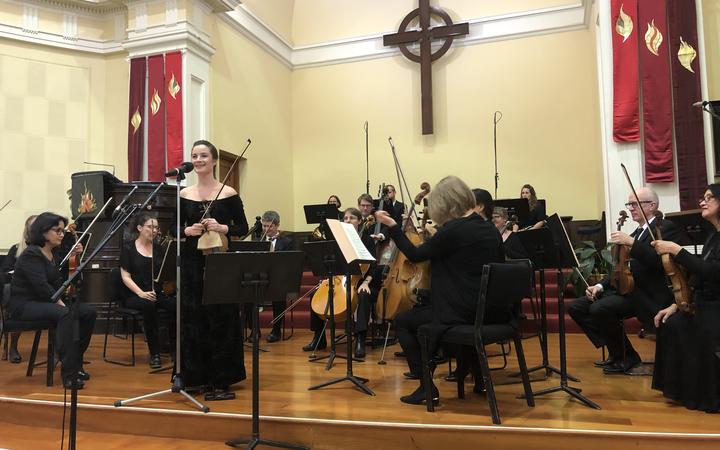 These Orchestra Wellington performances at St Andrew's on the Terrace in Wellington approach the experience that Mozart’s original audiences would have enjoyed. Many of his works were performed in churches, or in cathedrals such as the one in Salzburg, where Mozart was employed. His music was written with these kind of spaces in mind, with the soft, rich resonance that high ceilings, wooden beams and ornate plasterwork provide. Other works were premièred in the private salons of his wealthy patrons, making them an intimate experience for small audiences who could observe the performers closely. Mozart would lead the performances from within the orchestra or as soloist, as Amalia Hall does here.

In the course of writing only five violin concertos, Mozart arrived at this perfection. A taut, springy opening precedes the violin, which steals in with an unexpectedly slow entrance, the prelude to a beautiful conversation between soloist and orchestra. The slow movement is expansive, and may be based on an aria from Mozart’s opera 'The Abduction from The Seraglio'. The final movement is known as the Turkish; a surprisingly restrained minuet bookends a rowdier 'Turkish' section whose drone bass, stamping rhythm, and chromatic ornaments would have seemed exotic to Mozart’s listeners.

Mozart wrote this symphony during a six month sojourn in Paris in 1778. He travelled there aged 22, hoping to get a position at court; sadly the success he had formerly enjoyed in Paris as a child virtuoso was not repeated, and he failed to secure permanent employment.  However while he was there he was invited to open the public concert series 'Concert Spirituel'. This allowed him to use a relatively large orchestra, including clarinets which he had not used in a symphony before, as well as horns, trumpets and timpani, which he deployed in full to make a grand opening.

This concerto brings a martial flavour to the music only to contrast it with more expressive measures. Compared to his third concerto, the violin dominates more, laying a constant flow of melody above the orchestra. The slow movement is a song like melody. The third  movement alternates a dance-like andante grazioso with a jig-like section that develops differently each time.

This symphony was premièred in Prague, as Mozart was cresting a wave of success created by his opera 'The Marriage of Figaro', which made Mozart the darling of the city during his visit there in 1787. Mozart and his wife stayed again with Count Franz Joseph Thun, the patron for whom the Linz symphony was also written. In the Count’s Prague palace, the Mozarts were wined and dined and generally feted all around.

The symphony he presented there reflects the music that had had such success with Prague audiences. It continues in the same vein of drama and lyrical melody that permeates his operas of this period.

This concerto was probably written in the summer of 1775. Mozart appears to have re-purposed part of an aria from an opera of that year, 'Il Re Pastore', for the bustling first movement. A hushed and contemplative adagio - the tutti strings are muted - is followed by a finale which breaks out of its rollicking 3/8 time into unexpected and contrasting sections that draw on popular dances and folk songs.

This symphony was written in late 1783 on the way home from a visit to Salzburg, during which Mozart hoped to effect a reconciliation between himself and his father, who refused to accept Mozart's marriage to his wife Constanze. The strained atmosphere meant that the couple’s trip home must have been an enormous relief, especially when, on their way through Linz, they were given an enthusiastic welcome by Count Franz Joseph Thun. The Count urged Mozart to give a concert. Mozart had no symphony scores with him but he must have had this work fully outlined in his mind, for he wrote it in an outpouring of music over four or five days. Mozart conducted the first performance for his hosts, to great acclaim. (Notes: Erica Challis)

Orchestra Wellington with Amalia Hall as director and soloist were recorded on 6, 13 and 20 June 2020 at St. Andrew's on The Terrace, Wellington by RNZ Concert.