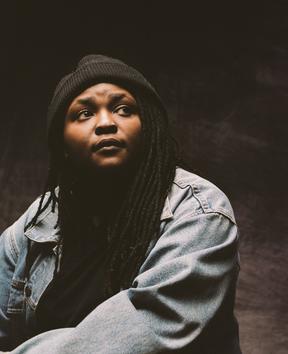 We’ve all had those casual, serendipitous encounters with people, that sometimes turn our lives around . . . which happened to American singer-songwriter Joy Oladokun at the age of 10, when she caught a television performance by the charismatic Tracy Chapman in a 70th birthday concert for Nelson Mandela back in 1988. Chapman was introduced and then sang with just her own guitar in front of a stadium full of people – in the musical raw, as one might say.

The 10-year-old of 1988 would wait another 28 years before she’d see her own name on an album sleeve, and, when it happened, her 2016 release with the title of Carry was a low-key but auspicious debut.

Based in Los Angeles at the time, and eventually re-settling permanently in Nashville, the singer had always made much of her young days, growing up in the small Arizona town of Casa Grande. A town in which she was not only queer in a pretty straight Christian community, but black in one that was predominantly white. These are ingredients that must have played a certain part in fueling the staunchness, tempered by simplicity, that comes out in the album’s title track.

In the wake of this first album, Joy Oladokun started to consolidate her career with a series of well-received singles, which meant that her songs started to turn up on some pretty high profile television shows.

One of these songs, titled 'Sunday', draws on the religious environment in which the singer grew up, to look at issues around coming out. It would be picked up by two reality shows, Love in the Time of Corona and Catfish.

But check out the singer’s official video of the number, with its intro and outro of spoken politicising to realise just how persuasive it is.

If you’ve missed out on the various Joy Oladokun singles over the past few years, then her new album, In Defence of My Own Happiness, does make a number of them available, but not all.

One of the high points of the new release is the track 'I see America'. Like a number of the songs around it, it looks at the seemingly never ending struggles of black communities and individuals in that country. But while other songs take their lead from specific situations and events, such as the murder of George Floyd, this looks at the more general evils of systemic racism and, in a way, is more frightening.

It was a song that she performed at the Bonnaroo Festival last year, an event that, in the midst of a pandemic onslaught, offered only on-line performances ... online but live, with the bonus of a spoken introduction from the singer. In fact, all that’s missing from the studio, album version is the almost gospel-like fervour of piled up backing vocals but there is a certain compensation in feeling that Joy Oladokun is singing it just to us.

And here's a little clarification on the three Joy Oladokun releases that use the title In Defence of My Own Happiness (IDOMOH)...

IDOMOH was released in June 2021 and has 14 songs, two are repeated from the previous release and 12 are new. This is the release that William has focused on.

'My Girl' (Robinson) – The Temptations
Emperors of Soul
(Motown)

'if you got a problem' (Oladokun) – Joy Oladokun feat. Jensen McRae
in defense of my own happiness
(Amigo)