Quickies with Stephin Merritt and The Magnetic Fields

William Dart looks at Quickies, the latest release from The Magnetic Fields, highlighting the deliciously manipulative songcraft of Stephin Merritt. 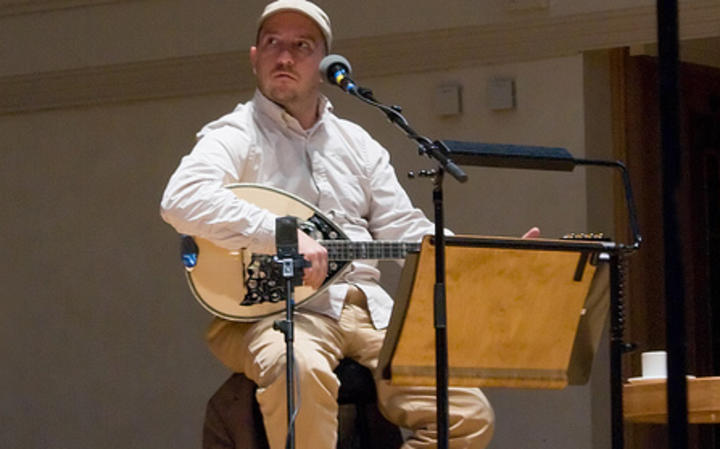 Stephin Merritt’s 'Experimental Music Love' was the odd track out on his 69 Love Songs, an ambitious set of 3 CDs, released 21 years ago under the American songwriter’s most familiar moniker, The Magnetic Fields.

In musical terms, this collection came across as a massive brag book that combined swagger and self-effacement; the arcane nestled beside the mundane in a quirky potpourri that celebrated the art of the songwriter.

Merritt’s often awkward, janglesome backings somehow fitted in with the set’s slightly unworldly hero, bound up in his own recriminations and fantasies. And when, to the accompaniment of what sounds like a rehearsal room piano, he sings of dancing in Busby Berkeley dreams, his partner of choice would doubtlessly be Dick Powell rather than Ruby Keeler.

Stephin Merritt, both solo and as a band leader, has sustained a career for almost three decades now, and is currently ensconced in the cherishing arms of Nonesuch Records – a company that allowed him the luxury of taking a visit to the magical land of operetta even if, as a singer, he’s no threat to fond memories of Nelson Eddy or Howard Keel.

By 2017, Merritt’s musical loins were sufficiently girded for the biggest challenge of his career: a 50-song autobiography telling the story of his first half-century.

He cheerfully admitted that it couldn’t be a blow-by-blow account of five decades in terms of his own, personal experiences.

The year 1969 is represented by a song about Judy Garland, who inspired that year’s Stonewall Riots. Merritt, at four years of age, was a little too young to be sashaying on New York streets amongst the cops and drag queens.

And I’m sure that, seven years later, the 11-year-old Merritt was not frequenting disco parlours where they danced the Hustle, but he paid tribute to it anyway for the year 1976, complete with Philip Glassy gleam.

The penultimate track, for 2014, is a piece of self-confessed shameless nostalgia. Didn’t he tell interviewer Daniel Handler, that he was rather hoping the song, 'I Wish I Had Pictures', could have been used in a Kodak advertisement?

That dream didn’t quite eventuate, but, just a few years ago, actor and Broadway star, Mandy Patinkin, one of Merritt’s Nonesuch label-mates, gave it a full theatrical workout with Thomas Bartlett on keyboards. He even added some expletives not in the original.

Stephin Merritt and The Magnetic Fields’ latest outing comes with the promisingly salacious title of Quickies and, true to this title, it does have its moments of naughtiness, some of them a little schoolboyish.

One of its less-than-a-minute tracks, titled 'Bathroom Quickie', features a nudging narrative that can be navigated in its Tin Pan Alley rhymes — quickie, hickey, Ricky and, finally, sticky — all delivered in forty seconds of misty tintinnabulation.

The 28 songs of Quickies grew very much from Merritt’s recent projects. The man had been immersing himself in reading short fiction and he’s had his first piece of writing published, titled 101 Two-Letter Words, described as a poetry book presenting the shortest possible words that you might use in a Scrabble game.

On the musical side, he’s been listening to a lot of French baroque harpsichord music, adding the wry observation that the harpsichord doesn’t really lend itself to expressing languor.

An accusation that I could well imagine irritating some of my Back-to-Baroque friends. After all, didn’t the 18th century French composer, François Couperin, entrust just that instrument to immortalise a piece that he’d titled 'Tender Languishings'?

One keyboard instrument that Stephin Merritt does salute in this new album is the toy piano, that fairyland tinkle-box that we associate with American composer John Cage.

With lyrics that hearken back to the cautionary tales of English writer Hilaire Belloc and American song-man Shel Silverstein, the track in question, 'When She Plays Her Toy Piano', is a delicate morsel of Stephin Merritt at his bittersweet best.

There are no harpsichords here, or toy pianos for that matter. But what a glorious backing has been concocted out of everything from the man’s own banjolele, to cigar-box violin and wine-box cello, not to mention some strange exotic sound swoops that might have brought a crinkled, anarchic smile to the face of John Cage.

There’s no indication in the CD booklet of whether it’s Claudia Gonson or Shirley Simms singing that lament for a toy-piano-playing idealist.

But it’s Gonson who delivers the next song which sets up a day, sometime in the future, when the world might find itself unencumbered by politicians.

The band’s video presents 'The Day the Politicians Died' in the context of a scramble of historic footage, but without images, Gonson delivers it, with one hand behind her back, playing her one-hand piano.

Stephin Merritt doesn’t always reveal that much of himself in his songs and there’s a certain teasing element in them that hasn’t dimmed in 29 years.

He plays the Devil’s Advocate – literally – in the song 'You’ve Got a Friend in Beelzebub' — although it would be even more droll if he had had a musical tug at Carole King’s leg.

Sometimes he almost seems to be playing it safe by allotting a potentially contentious number to one of the women in the band.

In fact, Stephin Merritt does tackle issues of faith, albeit very unconventionally, when he gives us an old Shaker hymn, 'Come, Life, Shaker Life', running it through the glisten of an autoharp waterfall.

Mostly, Stephin Merritt avoids the deep and the spiritual. A song titled 'Kraftwerk in a Blackout' is simply about bringing out the dusty 8-track and dancing.

The death of the German band’s leader, Florian Schneider, was too recent to tint the lyrics. But then maybe Merritt is more interested in pulling off a virtuoso triple-rhyme with “blackout”, “back out” and “8-track out”.

Elsewhere he professes to wanting to join a biker gang, and further into the album he longs for fangs and a tail, with a sex neither female nor male.

But on more contended days, he’s happy to tell us about the best cup of coffee in Tennessee, with a banjo tune that begs for bluegrassing.

But is there a more serious side to Stephin Merritt, this man who has been so carefully constructing a career on disc since 1991? Is his portrait of ‘The Boy in the Corner’, a self-portrait, furtively scribbling in his little book while, around him, the song’s strange little waltz spins all manner of diversionary harmonies. All of this achieved in just under a minute.

This is a man who can’t resist a final punch line, sometimes grim and often cryptic, as in that last song when a mysterious figure, of unspecified gender, dances in the spotlight, glittering, coiffed and fulfilled.

A feature that you can also see in his incessant search for clever rhymings, already pointed out, and the ironic denouement of the album’s final song, 'I Wish I Were a Prostitute Again'.

Trapped in the middle of what sounds like a doggedly chiming gamelan, the deadpan Merritt outlines his own version of money being the root of all discontent.

In the final count, I always look to Stephin Merritt for a lightening of the heart, in much the same way as the throwaway bagatelles of Jonathan Richman have always given me pleasure.

And this can be found in a duet between Merritt and Shirley Simms.

There’s always been a place in popular music for slanging songs, from the many songs of Butterbeans and Susie and Cole Porter’s 'Cherry Pies Ought to Be You' through to the vituperative Vanity 6 singing ‘He’s so dull’.

This proud tradition is restoked with Merritt’s 'My Stupid Boyfriend', a tongue-in-cheek catalogue of absolute inconsequentialities, with a bit of gender confusion on the side.

'In an Operetta' (Merritt) – The Magnetic Fields
i
(Nonesuch)

'The Boy In The Corner' (Merritt) – The Magnetic Fields
Quickies
(Nonesuch)