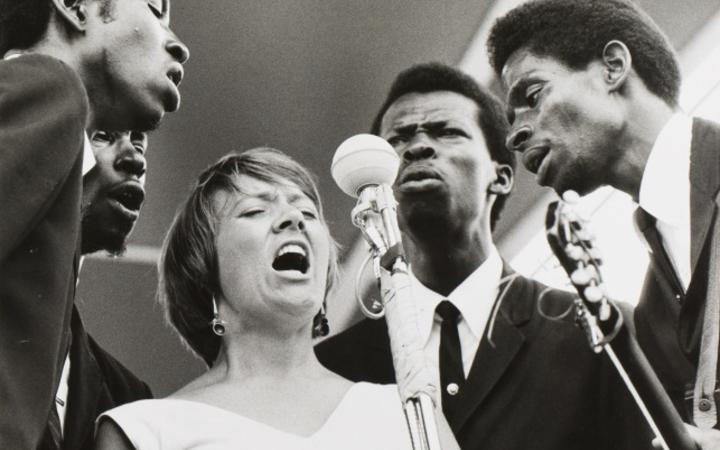 English punk band, Dealing with Damage is in a relatively gentle mood here on their new album, Ask the Question, surprising me with a song dedicated to Barbara Dane.

The object of these punkster’s admiration isn’t actually named on this track but I could well imagine the 93 year-old singer, grabbing her guitar and joining in with them for a worthy cause.

But then Barbara Dane was always a great collaborator, as we can hear in her own setting of some Malvina Reynolds’ lyrics, standing up for the Mississippi Freedom Schools in the summer of 1964.

Don’t be fooled, though, by its catchy pop swing, or the smooth harmonies of the Chambers Brothers behind her. Dane means business – the musicians could be singing for us here and now in 2020, perhaps on the strife-torn streets of Minneapolis.

Barbara Dane put out her first album, Trouble in Mind, in 1957, as a blues singer. The disc’s title came from the same song, with trombonist Bob Mielke stepping out of the small band to give the singer a rousing introduction.

When Barbara Dane turned 90, the team at Smithsonian Folkways celebrated her with style and scholarship. A two CD collection, released in 2018, presented recordings from this 1957 debut to some stirring a cappella from the singer’s 80th birthday concert, fifty years later. Here, two of the three men singing alongside her are family: her sons Jesse Cahn and Pablo Menéndez.

Barbara Dane’s personal philosophy is highlighted on the back of this CD booklet.

“Discover how a young white girl, taught to walk and talk like Jesus,” she tells us, “followed a different path, to a secular world, working for the same peace and justice for Humankind that he was willing to die for.”

Photographs in the CD’s booklet show her working with Memphis Slim and Willie Dixon, but also with Bob Dylan as well as a who’s-who line-up of Peter Yarrow, Pete Seeger, Phil Ochs and Joan Baez at a 1975 Anti-Vietnam War demonstration.

While many will cherish the 13 previously unreleased tracks on this release, when you work through all 39 of the songs you’ll become aware that here is a woman for whom social protest was never mere pretext; it was at the very core of her music.

The booklet has a photograph of Dane leading a 1963 Anti-Vietnam war march in San Francisco, singing to her guitar. And I could certainly imagine, if she were younger, she might be contributing a strummed anthem to mark the murder of George Floyd in Minneapolis last month.

Back in the 70s, albums such as I Hate the Capitalist System, with songs like 'I Don’t Want Your Millions, Sir', didn’t mince their messages.

Another number, 'Working-Class Woman', might have been written by Peter Boyd, but Dane took her own initiative with it, adding input into the lyrics, inspired by the life and struggles of her sister. The sense of utter exhilaration in its final few minutes, sung over Robbie Merkin’s almost possessed piano, is palpable.

There aren’t many singers actively recording at the age of 89, which is what Barbara Dane achieved just four years ago.

Teaming up with pianist Tammy Hall, she produced the album Throw it away, an eclectic collection of other folk’s songs including The Beatles’ 'In My Life', Paul Simon’s 'American Tune' as well as Dave Redd Welsh’s 'What Kind of Country'.

This may seem a little heart-on-sleeve for some tastes but, with the video’s images of the homeless on city streets, I defy you not to be moved.

Lucinda Williams also set off her recording career, in 1979, with an album on Folkways, as had Barbara Dane.  Called Ramblin’, It was an understated but extremely persuasive set of classic country and blues, ranging from the Carter Family and Hank Williams to Memphis Minnie and Robert Johnson.

By her next album, Happy Woman Blues, just a year later, on the same label, Lucinda Williams asserted herself as a songwriter.

The breakthrough came however with her third, eponymous outing, eight years on, recording now for the English punk and alternative label Rough Trade. Its standout track was one which Williams confessed had taken its inspiration from Joan Armatrading.

'Passionate Kisses' would be catapulted into the country charts by Mary Chapin Carpenter but for me it still works best when delivered with the gangling naturalness of the woman who wrote it.

The re-release of this album, 25 years later, had the magazine No Depression reflecting on the hard slog that it had taken Williams to make and sustain a career – how her songs would have to wait until more palatable versions were recorded by softer voices as well as her painstaking work in getting her music recorded as she wanted it.

The 1998 album, Car Wheels on a Gravel Road was six years in the making, six years well spent when it earnt a Grammy as best Contemporary Folk album.

Williams never had the sweet tones of a Joan Baez or Judy Collins, but she also got a nomination for best female rock performance for one of the Car Wheels songs. This was a Randy Weeks number that fits in well with her laconic description of so many of her own songs, describing them as travesties of romances. It’s sly and snakey, with no less than three slide guitarists on the job but, after all, could you really imagine the forthright Williams being so fatally smitten?

At one point during a live concert last year, Lucinda Williams commented that, for a while there, she thought she would be competing with Car Wheels on a Gravel Road for the rest of her life.

Of course she didn’t. Many of us easily succumbed to the progressive weathering of her voice and the emotional tenacity and subtle shading of her songwriting. No accident this, for the daughter of the distinguished poet Miller Williams, whom she tributed in her 2016 album, Ghosts of Highway 20.

I played the song 'Death Came' on New Horizons at the time. It’s a lament for Everyman as much as for her father. Listening to it now, with Covid-19 ravaging countries around the world, and all the horrific violence breaking out after the death of George Floyd, it seems to me to have a new power.

Four years ago, I was struck by Bill Frisell’s reverberant guitar providing a prelude, casket lining and suitably elegiac interludes, but at its very heart remains the unswerving and rough eloquence of Lucinda Williams’ voice.

Living for the last few weeks with Lucinda Williams’ new album, Good Souls Better Angels, my appreciation of it has been inevitably coloured by the context of our pandemic times and the horror of what looks like the toppling of the United States of America.

Certainly, Danny Clinch’s cover portrait of the singer fits in with these feelings.  Williams, caught in stark black and white, closes her eyes with the back of her hand resting on her forehead.

And even if this music was recorded last year, over 15 days between September and November, there was still a lot of bad news about.

By the end of this song, when Lucinda Williams is finding bad news in the refrigerator and the sink, you’d be forgiving for imagining a wry smile twisting the singer’s mouth. But there’s nothing to be smiled at when, later on, she berates the liars, lunatics, fools, thieves, clowns and hypocrites who are in command. She’s right on target.

You don’t hear Bill Frisell ear-comforting guitar here to tend the wounds and offset the 67-year-old's often savage vocals. The pacifying shimmer of a major chord opening the final song doesn’t have much of a life before it’s slashed away by the rasping cut of singer and guitars.

Less expected are the shades of tango which usher in the song 'Pray the Devil back to Hell'. But again, it doesn’t last long – its South American sepia is subsumed into the drive of an unstoppable rock ‘n’ roll train.

While Lucinda Williams has admitted that she’s singing about Donald Trump in the song 'Man without a soul', she also suggests that it could equally be Mitch McConnell or, for that matter, too many people today who wield the power.

True to her trademark tenacity, this number doesn’t let up for a flicker of the eye, tilting back and forth between its two chords, gruffly illuminated by the growl and roar of guitar, and the militaristic flares of Butch Norton’s drums.

Williams is no fan of the current President of the United States, recently describing him as the worst president in her country’s history. This woman, who read Malcolm X and Dick Gregory in her youth, is now, in her own words, riled up. When folks tell her that social protest is not her job, she quotes Woody Guthrie and retorts that it is.

While the world is still aghast at Trump’s callous photo-shoot, Bible in hand, in front of Washington’s St John’s Church, Williams had already come up with a song that sets the scene, and cuts to the quick.

'What Kind of Country?' (Welsh) – Barbara Dane
Throw It Away
(Independent)