On April 7, the music world lost the great American producer Hal Willner to Covid-19. William Dart pays tribute to a man whose various albums did the same for a panorama of musical heroes, stretching from Kurt Weill and Nino Rota to Thelonious Monk and Charles Mingus to Marc Bolan (soon to be released). 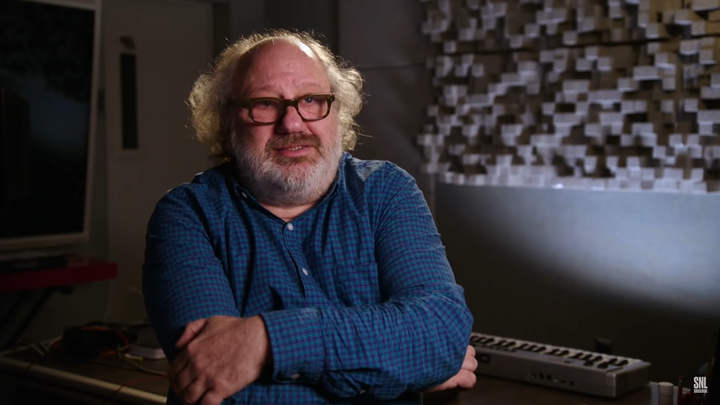 How often does a recording or movie feature a group of artists who might have been handpicked from your own personal favourites? This happened for me in 1981, hearing Carla Bley and her band canter through a piece from the score of Fellini’s 8½ .  Bley injects a tang of Kurt Weill into what could well have been no more than jolly old Big Top Italiano.

It was just one of many brilliantly cast salutes to the Italian composer Nino Rota on an CD titled Amarcord Nino Rota, the very first of Hal Willner’s tribute albums.

But now, 38 years on, with Hal Willner struck down by Covid-19 in April, I’m wishing that, somehow, this music could magically morph into a funeral march, be it either Mahlerian or New Orleans. I think the man himself would have rather liked both.

Hal Willner’s day job, from 1980 up till his death two months ago, was being the music man for NBC’s Saturday Night Live – coming up with just the right musical backdrop for the show’s sketches. Music that, according to actor Kate McKinnon, was such an integral part of the sketch that you didn’t notice it but without it, the sketch wouldn’t have made any sense.

Created on the sidelines of his time in NBC’s studio, the 1981 Nino Rota project was the start of a lifetime’s magnificent obsession for a man who really knew his music, through its many highways and, more importantly, byways.

In 1984 Willner decided that his second venture would be a homage to jazzman Thelonious Monk. That’s the Way I Feel Now was a double album of Monk compositions, putting Carla Bley and Gil Evans in amongst contributions by the radical John Zorn, the Night Tripper Dr John, and the extremely eccentric Todd Rundgren, here running wild with saxophonist Gary Windo, through Monk’s 'Four in One'.

Hal Willner’s third collection, the following year, tributed Kurt Weill, in an album titled after one of the composer’s finest ballads, Lost in the Stars.

Willner acknowledged that it came about through both the critical and commercial successes of his previous releases, assuring us in the album’s liner notes that he was determined to keep it all fresh and freewheeling, an approach that was sorely needed in a play-it-safe, pigeon-holing age.

It came with a few ear-popping surprises, such as John Zorn and his musicians delving into Weill’s 1929 'Happy End'.

But it also had songs on a more traditional trajectory such as Sting singing 'Mack the Knife', Tom Waits giving us 'What keeps mankind alive', Lou Reed crooning through 'September Song' and Marianne Faithfull relating the gaunt tale of the soldier’s wife.

I’ve been getting immense pleasure over the last six weeks revisiting the various Hal Willner albums. Not only from fondly remembered favourites, but also from discoveries and the appreciation of newly savoured details, such as Faithfull’s snappy band there, with Chris Spedding on guitars and John Cuomo on woodwind.

These albums are a little like the treasured Christmas annuals that one was given as a child, publications that would fuel the year to come with fun and fantasies.

Willner had more for us in 1988 when he put the spotlight on the music from vintage Disney films. The title song of the album, Stay Awake, was delivered by singer-songwriter Suzanne Vega with appropriately childlike innocence.

Stay Awake was not all so demure. Around this Sherman brothers tune from Mary Poppins, there was a riot of wonderfulness going on.

The 66-year-old exotic coloratura, Yma Sumac, transported Sleeping Beauty’s 'I Wonder' to Andean heights, while Sun Ra and his Arkestra bibbed and bobbed through 'Pink Elephants on Parade' — jollity that would eventually be interrupted by cascading harps, introducing Harry Nilsson playing the what-me-worry boy in an almost cinematic ‘Zip-A-Dee-Doo-Dah’

1992’s Weird Nightmare, described as meditations on jazz man Charles Mingus, was as dark and mysterious as Stay Awake had been bright and chirpy.

It came with a unique soundscape, bringing in the unconventionally-tuned instruments of avant-garde composer Harry Partch, which provided an eerie setting for Elvis Costello’s title song.

Willner’s Mingus meditations had had a long and leisurely birth, finally coming together as he branched out into live concert hall tributes.

The first one, in 1991, focused on Tim Buckley; they ended in 2018, with a recreation of Bob Dylan’s 1963 town hall concert, calling on artists from Laurie Anderson and Joan as Policewoman to Geoff Muldaur and actor Bill Murray, whom you can catch on line in Dylan’s 'Don’t think twice'.

The description of 2016’s The Bells, as a day-long celebration of the music of Lou Reed, said a lot. These tributes tended towards the encyclopaedic and one commentator who’d experienced a 2004 Randy Newman evening in Los Angeles, was relieved that it clocked in at only three hours — when similar events had been known to stretch to six.

These performances live only through second-hand accounts and the occasional pirated video. What I wouldn’t give to hear Gavin Friday, a close associate of Willner, tackle Newman’s 'In Germany Before the War' or the tremulous Victoria Williams give us 'A Texas Girl at the Funeral of her Father'.

Two of Willner’s live tributes did make it to CD — a Harry Smith Americana project caught in Los Angeles and New York in 1999 and 2001, and a Leonard Cohen tribute at Sydney in 2005.

This was followed, in 2006, by a recording of Willner’s Rogues Gallery project, that was subsequently performed live over the next few years at numerous venues from New York and Dublin to London and Sydney.

It had grown out of the Johnny Depp movie, Pirates of the Carribean, encouraged by not only the actor, but also the film’s director Gore Verbinski and the dauntless head of ANTI- Records, Brett Gurewitz.

Subtitled Pirate Ballads, Sea Songs and Chanteys, this double album brought together a host of artists, from Bryan Ferry and Lucinda Williams to Van Dyke Parks and the cartoonist Ralph Steadman.

Willner, in his understandably rambling introduction to the album described it as pushing the envelope more than he ever had before, going by the seat of his pants and sometimes figuring it out when he got there. Its 43 tracks offer an almost bewildering profusion of musica marina.

This is Willner at his most eclectic. On one hand, there’s the rowdy and rough, growing out of the same spirit that created the naval legend of rum, sodomy and the lash. But countering the rough and raw offerings of singers such as Nick Lowe and David Thomas, there’s the lyrical Rufus Wainwright and the singular Mary Margret O’Hara, one of Willner’s frequent collaborators. Here she offers a folk-like setting of a Harry Kemp poem, in an otherworldly sound surround.

The good news for Hal Willner’s admirers is that there is, waiting in the wings, his final project, a tribute to the English singer Marc Bolan, of T. Rex fame, titled AngelHeaded Hipster.

Willner had felt that Bolan was underrated as a songwriter — not unlike John Zorn who, 22 years ago, also produced a tribute album to the Englishman in the same Great Jewish Music series in which he’d embraced Burt Bacharach and Serge Gainsbourg. (Zorn’s tribute to Bolan had our own Tall Dwarfs singing 'Ride a White Swan').

Willner had been working at AngelHeaded Hipster for some years on both sides of the Atlantic to create 26 tracks, with everything from David Johansen going for 'Bang a Gong', and Lucinda Williams telling us that 'Life’s a Gas', to the alliterative joy of Joan Jett’s jiving 'Jeepster'.

We’ve been allowed two previews of what’s coming up in a few months. One has Nick Cave, with string quartet, being gently reverential with the song ‘Cosmic Dancer’.

The other has Devendra Banhart doing his 21st century hippie thing with ‘Scenescof’ — 1968 vintage Bolan from a T. Rex album with a lengthy title to rival those of Fiona Apple: My people were fair and had sky in their hair but now they’re content to wear stars on their brows.

Banhart, a T. Rex and Bolan fan from his youth, claims that this particular song gave him a sense of freedom and the courage to carve out a bit of fantasy in his life back in his late teens.

Replacing the song’s original bongo backing with the chime of vibes and plucked guitar, not so far from the minimalist lull of Terry Riley in C, it’s a trancey meditation that places Hal Willner evanescently up in the Heaven that he’s earned.

'Four in One' (Monk) – Todd Rundgren
That’s the Way I Feel Now: A Tribute to Thelonious Monk
(A&M)

'Little Lieutenant Of The Lovin God' (Weill) – John Zorn
Lost In The Stars: The Music Of Kurt Weill
(A&M)

'Ballad Of The Soldier's Wife' (Weill) – Marianne Faithfull, Chris Spedding
Lost In The Stars: The Music Of Kurt Weill
(A&M)