Bill Direen of The Bilders fame is back with a new band and an album that bears its name, Ferocious. William Dart looks at some of Direen’s new music, together with a few Bilders classics and a special preview of another upcoming release. 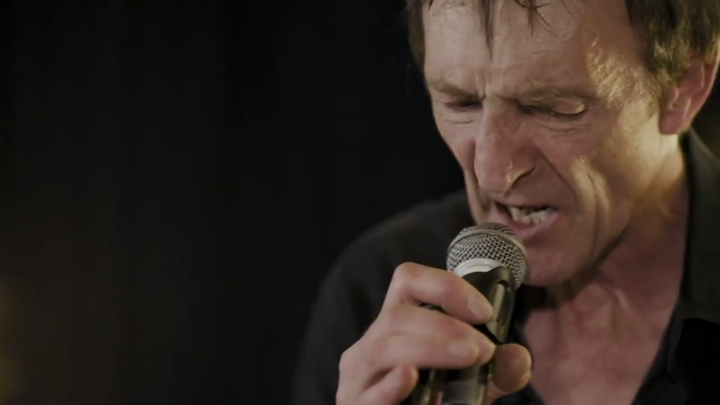 Here’s one of the most magical of all Kiwi chord trails. The date is 1983, and the singer-songwriter is Bill Direen.

‘Alien’ featured prominently on this programme back in 1986, when I played Bill Direen’s music alongside that of fellow songwriters, Ross Mullins and Mahina Tocker. Two years later, in 1988, it was the first number to be discussed in a conversation that I had with the man himself in RNZ’s Wellington studio. Compiling the eventual programme, I couldn’t resist connecting some dots. Here was a song , I ventured, with all the potential of a David Bowie megahit nestling in the cocoon of Direen’s home studio.

I could have mentioned Chris Knox back then as well. He plays organ and contributes backing vocals on a song that was actually recorded in the Knox household’s living room.

Bill Direen reveals much of what he is today in that very first album by The Bilders (also known at the time as The Builders), titled Beatin Hearts.

From the start, he was fiercely political. One of its songs had been specifically inspired by the 1982 Whanganui Computer suicide bombing. Talking to him about it back then, he stressed how that number was permeated with his ideas on sexuality, commercialism and Catholicism. Weighty stuff, I thought at the time, but it also had the sturdy frame and scansion of a durable folk ballad.

Bill Direen generously opened up to me during that Wellington session. He was a marvellous balance of the erudite and the everyday. I’d met up with him being very aware of his literary bent. And, let’s face it, singer-songwriters don’t automatically come with a Masters in English Literature.

However, when he took to the words of others, he didn’t hold back from intervention. He may have been keen on the political thrust of Denis Glover’s poem ‘The Magpies’, but he also wanted to cast it in a spooky, supernatural ambience, that fitted in with the poetry he admired at that time — Edgar Allen Poe’s 'The Raven' and Samuel Taylor Coleridge’s 'The Rime of the Ancient Mariner'. And if some liberties were taken with the original words, well . . . it was all in the cause of a good song.

During the first decade of a new century I found myself following Bill Direen more as a writer than as a songwriter.

Reading Direen had been time very well spent, and I remember most vividly his Enclosures of 2008, which promised to combine the genres of autobiography and the fantastic.

It certainly did that, providing a Pacific setting for the Old Testament tale of Jonah, catching the unfortunate fisherman’s torments with some Latin lines from a seventeenth-century oratorio by Giacomo Carissimi that I was able to put my own soundtrack to.

Bill Direen’s 2010 album, Mean Time brought me back to his music. This was very much a global venture, its cover stressing that while the singer himself was based in Paris as well as New Zealand, his fellow bandmembers were locked into Dunedin, Auckland and Kaukapakapa.

The sung song was not a major factor here — Direen’s voice had drifted into a zone halfway between singing and speaking.

The complexity of Bill Direen and his work comes out in Simon Ogston’s 2017 documentary A Memory of Others – a movie that’s heartily recommended if you want to penetrate the dark and sometimes almost inscrutable psyche of this man, as well as getting valuable insight into the music on his most recent release.

Much of the film is locked into grey winter landscapes. Amongst the South Island scenes, a particularly memorable one has him reading a poem dedicated to Janet Frame at her house in Oamaru. Amongst the North Island ones, there’s a captivating few minutes where he takes over his sister Marie’s music class in Wellington’s Clyde Quay School.

Bill Direen’s new album is fearsomely stimulating, but would one expect anything less with its title, Ferocious, also being the name of his new band, consisting of drummer Johannes Contag and guitarist Mark Williams?

And how could it be anything else, appearing on Steve Garden’s prestigious Rattle Records, in the company of the best of our country’s jazz and contemporary classical music?

The sleeve features the word FEROCIOUS laid out, letter by letter, in a noughts-and-crosses grid, with no apparent logic as to their placement.

Which is, I’m sure, all Direen’s very deliberate doing. Here’s a veteran in the art of playing with words, and, in his early days, a great fan of the surrealist twists of the French poet and singer Boris Vian.

In fact, Direen’s wide-ranging literary background came out in a concert that Ferocious the band gave at Auckland’s Fringe Festival just two months ago.

First up was a short bracket of his solo songs, with guitar, including his own translation of a ballad by Hanns Eisler and Bertold Brecht titled 'Sing this in Prison'.

Later, he surprised us by reciting, with some relish, a viciously satirical short verse by Robert Burns, written, we were told, when Burns’ Scottish publisher diddled him out of his royalties, a money-hogging capitalist if ever there were one.

Our introduction to the new album came with the atmospheric 'Blue Rain', an evocative piece of writing in which Direen chooses his moments of song very carefully, sometimes being little more than heightened speech.

If Bill Direen is here laying out his own exploration of the state of Man Alone, a few tracks on we’re thrown into the clustering throng of humanity in a rallying song for the earthquake-ravaged city of Christchurch.

‘Christchurch remains’ is the song’s byline and chorus in a march of strength and resilience that’s fuelled by the slash of Williams’ few chords and the splash of Jo Contag’s cymbals.

There’s a lot of anger in Bill Direen’s new album, and maybe it comes to a head in a Blitzkrieg blast through R.A.K. Mason’s poem 'The Young Man Thinks of Sons', a poetical tirade from Mason’s 1934 collection No New Thing. The poet bitterly rejects his faith in continuing a family line, thus breaking the thread of his race.

“Let the sword rot unused in its scabbard and the womb lack its quota” is just one line that stands out on both page and in recording, building up to a clangorous climax of fury with rusted ploughs and nettle-grown kingdoms.

Bill Direen’s Ferocious takes no prisoners.  Many tracks live up to its title, although one, 'The Perfect Tone', lulls us on a rolling 6/8, as the singer rocks babes in arms.

There’s a boldly experimental offering too. 'You Hear' is a dialogue between Direen and himself, made possible with a pre-recorded voice track that he impressively pulled out on some handheld gizmo for his Auckland performance. And how could such a lover of words resist a delightful diversion in Dictionary Land?

Another dialogue runs through the eight minutes of 'Extraordinary Day'.  This is one between a body and a ghost, taken from a 13th-century Middle English mortality lyric, characterfully read out by Direen over a backing that’s almost shivery in its minimalism.

All of which provides gothic bookends to another of the singer’s incisive tales of how the very ordinary doings of a day can be transformed into the extraordinary.

And now, in the wake of this new album, there’s even more extraordinary music coming from Bill Direen, the latest being, in essence, a lockdown song, hot out of the global studio. “Live in eternity, Die for a Day”, the melancholic ballad sets out, before dispensing images that will resonate for many of us with the worries, restrictions and ironic rewards of the last two months.

And, in its lowkey way, it’s a bit of a star turn. Not only for Bill Direen, but for the other musicians playing alongside him, albeit with oceans between them. Matthew Swanson of Lambchop adds bass and Wurlitzer, Alex McManus, whom you may have heard in the line-up of Vic Chestnutt’s band, is on guitar. The finishing touch comes from Martin Wenk of Calexico, a muted trumpet from Leipzig that, if not the last post, is certainly a reminder that we live in very worrying times.

This last track is intended for release in June 2020. To hear it now as part of the complete programme, click Listen below. Grateful thanks to Bill Direen for the use of this track.

Thanks also to Simon Ogston for supplying us with and allowing us to use two extracts from the soundtrack of his 2017 documentary about Bill Direen, A Memory of Others.

'(In a Twinkle we are here…)' (Direen) – Bill Direen & children of Clyde Quay School, Wellington
ex Simon Ogston film A Memory of Others
(Simon Ogston)