We’ve waited almost eight years for a new album from Fiona Apple, so her Fetch the Bolt Cutters is a cause for celebration. William Dart celebrates. 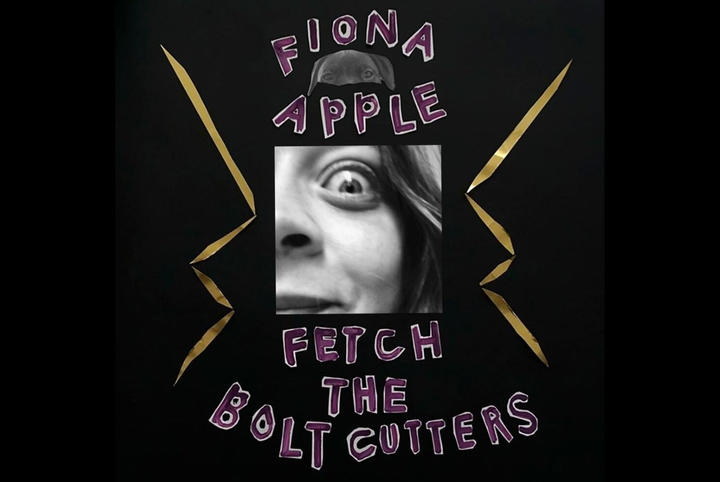 My favourite of all Buddy Holly songs is done proud here by Fiona Apple and Jon Brion. It turned up on a Buddy Holly tribute disc nine years ago and was manna from heaven for Fiona Apple fans. I’d been amongst their number for over a decade.

She was quirky, unpredictable, cutting up her musical lines with the slash of scalpel, rather than regular scissors.

One song, titled 'Never is a Promise', came with the big plus of a Van Dyke Parks string arrangement.

But even with just her own piano, had vulnerability even been more vulnerably expressed, in such high intensity zones?

A second Fiona Apple album, When the Pawn…, followed pretty promptly, but we waited six years for a follow-up to that, a 2005 collection that lived up to its title: Extraordinary Machine.

There’d been a long and laborious birth, having been completed in 2003 and soundly rejected by the singer’s label as not commercial enough. A judgement that almost seems to have been ironically pre-empted in one of its songs.

Fiona Apple had no intention of being steady, going nowhere.

From its very opening title song, she protested, for all to hear, that she hadn’t been spreading herself around. This point being made in a song that was a bit of a conversational confessional, along the lines of 'Adelaide’s Lament' from the musical Guys and Dolls.

It’s wry; playful and serious at the same time. And, in support of this stand, Jon Brion’s clever orchestration suggests that Sesame Street might be teaming up with the ghost of Prokofiev on the Great White Way.

Despite accolades that included a Grammy nomination in 2006, Extraordinary Machine was followed by seven years of frustrating silence. We grabbed at any straws that we could, in the form of what seemed to be the singer’s annual guest appearance.

Here is where that Buddy Holly song fits in, being released just months before the patiently waited for fourth CD from Fiona Apple.

The new album came with a mouthful of a title — The Idler Wheel is wiser than the Driver of the Screw and Whipping Cords will serve you more than ropes will ever do.

Here’s a singer, I thought at time, who’s not afraid to be cryptic. And she also has no fear of being cute, having Jon Brion bring out his glockenspiel right at the start of the opening track.

But be warned, things toughen up pretty quickly when she flourishes a howl that could have come from latter-day Buffy Sainte-Marie.

You might also need a musical Sherpa guide to get a grip on the cliff face of its tune, climbing and circling against the ominous rumble of timpani.

The Idler Wheel is a rich feast of an album. Moving from the seditious sonic satin of 'Every Single Night' to the wilder propulsions of 'Hot Knife', its range is only too obvious.

The combination of hot and presumably sharp knives with butter may seem a grim image for a love song, but, as she comments early on, maybe it’s also about the genesis of rhythm – rhythms ridden by her and Maude Maggart as a sort of two-woman Lambert, Hendricks and Ross.

That song from The Idler Wheel was very much in my mind when, out of the blue, Fiona Apple appeared on a new tribute to the late jazz singer Mose Allison, titled If you’re going to the city.

Surrounded by an eclectic line-up of fellow musicians from Iggy Pop and Dave Alvin to Chrissie Hynde and Taj Mahal, she delivers Allison’s delightfully throwaway love song, 'Your Molecular Structure'.

Stylistic connections with her own mode of songwriting are uncanny, even if Benmont Tench’s piano doesn’t quite match Allison’s scattergun verve.

That tribute to Mose Allison appeared in November of last year and within five months, Fiona Apple enthusiasts received a more generous, and personal helping of their favourite singer.

Her fifth album came with a title, Fetch the Bolt Cutters, that suggested we might be in for a gruff and gritty outing. And it is, growing out of five years isolation in a home studio with a three-piece band.

The title of the album, she tells us, came from a line in a Netflix crime drama, and for her became an image of taking up a tool of liberation to set ourselves free.

And from its opening evasive love song, the singing offers its own profile in courage, including some of the most valiantly sustained notes that I’ve ever heard.

It’s quite a journey this song, with its cry of “Blast the music, bang it, bite it, bruise it” all the way through to the Yoko Ono-ish crying in its final few seconds. Altogether, it’s quite an outpouring, inspired by a meditation course, in which a throbbing headache inside the singer’s head mysteriously escaped and became something of a group pulse. A song that, according to Fiona Apple, grew out of its percussive base as she banged around finding herself.

The self-revelations of Fetch the Bolt Cutters are deep and immensely personal. But would one expect anything less from music that’s been created literally at home over such a long period.

The relentless roll of a song like ‘Shameika’ grew out of Fiona Apple’s own issues with OCD, responding musically with the perfect balance between obsession and compulsion.

Real life inspired the song ‘Under the Table’, memories of a nightmare dinner party, coping with an obnoxious guest, a big and unidentified name in the streaming industry.

Its surge of bitterness is buoyed on rhythms that remind one how these musicians spent years in sonic exploration and jamming around all the rooms at the singer’s home. Any household object could be seconded as a percussive plot. While Amy Aileen Wood is the woman behind the drum kit, everyone in the band does their bit to keep the rhythm cooking.

Bass-man Sebastian Steinberg is credited with stomps and breathing, Apple herself with making a chair into part of the musical palette.

And, as the song progresses, drones of defiance drift underline a powerful political statement in these times of #MeToo.

Fiona Apple’s new album has yet to do the award rounds, but in the meantime, a rarely allotted ten-out-of-ten score from the Pitchfork critics augurs well. Its baker’s dozen of songs are almost relentless in their hold on the willing listener.

On a track like ‘Heavy Balloon’, you’re helpless to resist as it’s laid out over the bomp and clatter of percussion, until Apple is joined by the distant, spectral echo of her own voice.

Eventually in full and unexpectedly harmonious duet, we’re told of the horrors of the song’s so-called ‘Heavy Balloon’ — the soul-destroying torment of depression.

Finally, there’s one track from Fetch the Bolt Cutters that I’ve been coming back to again and again.

Perhaps it’s those twelve iterations of the song’s title, ‘Ladies’, that draws me in, pretty much transfixed by Fiona Apple’s different inflections of that one word.

She sings out here for the women that our society has, for generations, suppressed and controlled. It’s revealing that, stylistically, there’s more than a tinge of soul ballad here.

Of course, it’s not possible now for it to be covered by Aretha Franklin, who passed away two years ago. But, bearing in mind the magnificent transformation of Adele’s ‘Rolling in the Deep’ when Franklin sang it on the David Letterman Show, what extra dimension might the Queen of Soul have added to this already powerful piece of writing.

'Your Molecular Structure' (Allison) – Fiona Apple, The Tippo Allstars
If You're Going To the City: A Tribute to Mose Allison
(Hot Possum)