William Dart laments the fact that summer this year has been blowing hot and cold so far but finds compensations in the new album by Tattletale Saints and from Karl Steven's soundtrack to the film Bellbird. He's also got a preview track from Charlotte Yates's upcoming release featuring musical settings of Katherine Mansfield poetry. 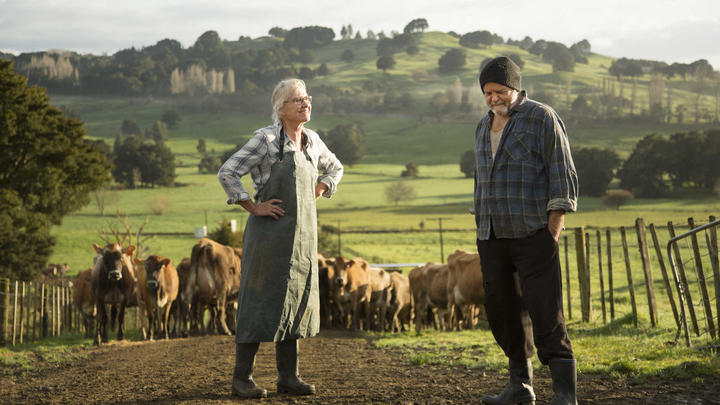 There’s a lot of music around town if you go out and look for it – certainly in Auckland, where I live, with the various free concerts sponsored by the city. Aotea Square, to start with, has been hosting names from Dave Khan and his band to country singer Donna Dean. And this month will be rounded off in the square with Matthew Bannister giving us some sneaky new angles on the Beatles’ Rubber Soul album.

Last week I had the opportunity to catch up with singer-songwriter Mark Laurent. The songs for the smallish Aotea Square audience ranged from his personal, Christian skew on Robert Johnson meeting the devil at the crossroads to a song from some decades ago, only too sadly relevant today. Here’s the original studio recording.

Auckland’s Anniversary weekend saw Mark Laurent taking on two gigs at the Auckland Folk Festival in Kumeu, now proudly in its 47th year. This year there was a generous line-up of local and international musicians, including the American ace banjo player Tim O’Brien and the British group Faustus, which I covered on this programme a few years back.

One of the headline attractions must have been the Tattletale Saints, who set off now on an extensive national tour, promoting their new album, Dancing under the Dogwoods.

New Zealand’s loss became Nashville’s gain a few years back, when Cy Winstanley and Vanessa McGowan moved to the States – not that they didn’t make a return visit pretty promptly in 2014, to pick up a Tui award for their first album, How red is the blood.

Listening to this album again, it’s interesting to note that fellow Kumeu performer, Tim O’Brien, is in charge of the disc’s smooth production, and their song 'Hank' so beautifully sums up, amongst other things, the pair’s need to move on.

The Tattletale Saints have given us a small and appreciated tasting of what we might expect when they dance under those dogwoods. In this handful of tracks, Cy Winstanley’s songwriting is as sharp as ever, here taking a gentle and affectionate dig at McGowan’s privileged status with double income and no kids.

Even wittier is the song’s sly echoing of the old Joe South hit, 'Games People Play', while a short instrument break reveals some of the elegant keyboard licks that sort of fall under the fingers when you’re in Nashville.

Some of the best music you can hear around the country this summer has been in the movie houses … well, if you managed to see Hamish Bennett’s Bellbird.

This is a marvelously observed, written and delivered tale of life up north amongst a farming community that, to put it mildly, is given to emotional terseness.

Bennett developed this full-length feature from an earlier short, Ross and Beth. This time around the emphasis is on the relationship between father Ross, played by Marshall Napier and son Bruce, played by Cohen Holloway.

Napier’s career goes right back 35 years, to his turn as Sel Bishop in Ian Mune’s rip-roaring movie of Came a Hot Friday; Holloway has quite a presence on local TV, most recently in the series Fresh Eggs.

But it’s Annie Whittle as the mother Beth who really sets the film off, a stalwart of the local community choir.

Composer Karl Steven explained to me how his whole score grew from what he describes as the humble ukulele and the instrument itself is central to the film’s narrative.

While you can hear and see a ukulele being played when Beth’s community choir gathers together, it moves into its own dramatic spotlight when Bruce picks one up and starts to teach himself the film’s title tune, a theme song that’s cleverly saved for the final credits.

He works at it, with a few awkward chords along the way until, slowly but surely, it coalesces as a fully formed piece, thanks to Steven himself coming in on bass with snare drum courtesy of Tim Stewart. It’s a magical coming into focus.

There’s a rough-hewn quality to Steven’s music that seems to grow out of the very fibre of this salute to Kiwi stoicism. Often it's sound that you almost want to feel in your hands, especially in the music that follows field day celebrations – a scene vivid enough to fit into a Country Calendar episode. The track, titled 'Community Brass' on the soundtrack, has Tim Stewart on bass drum, trumpet and tuba while Steven brings in pedal organ, button accordion and snare.

The song that the whole movie has been building up to, is given out over the final credits. It’s sung by its composer, Caoimhe Macfehin who, apart from being Steven’s sister-in-law, is also a partner on various of his musical ventures, from The Drab Doo-Riffs to Queen Neptune.

As this folkish ballad is whistled, sung and vocalized, the Russian Tolstoy came to mind and his comment that there is no greatness where there is not simplicity, goodness and truth. Factors that make his into a newborn Kiwi classic, accompanied by the South Pacific’s own guitar.

Moving from Caoimhe Macfehin’s ukelele to Dave Dobbyn’s guitar reminds me that it was 20 years ago that Charlotte Yates first set her sights on tributing the greats of New Zealand literature, starting with James K Baxter and Dobbyn singing his ‘Song of the Years’.

The Baxter set appeared in the summer of 2000, with tracks by the likes of Māhinaarangi Tocker, Martin Phillipps, Plan 9 and Emma Paki, not to mention Sam Hunt collaborating with Gareth Farr and David Eggleton with David Downes. It was a fest.

A nod to Hone Tuwhare would follow in 2005, and one to Witi Ihimaera in 2011, both involving a range of musicians and stage presentations on the festival circuit.

But was there a hint of another on the horizon when Yates herself included this setting of Katherine Mansfield in her 2017 album Then the stars start singing?

Charlotte Yates’ new Mansfield compilation is still a few weeks off and, it’s all due, she told me, to discovering Vincent O’Sullivan’s 1988 collection of the writer’s poems, carefully gathered from a variety of sources and manuscripts and revealing what she was, in O’Sullivan’s words, capable of unexpectedly inventive turns of phrase and intensity.

To start with, you’ll hear that last song, by Yates herself, in a new Mark Tierney remix, along with tracks from Delaney Davidson, The Bats, Anna Coddington, and Julia Deans, who has the challenge of a heartrending poem written on the death of Mansfield brother Leslie in the Great War at the age of just 21.

You can’t get away from nature and landscape in so many of the album’s chosen poems, any more than you could in that last song.

Those gulls, mad in love with the river, connect up with the wounded bird that French for Rabbits have chosen for the album’s final track. A poignant tale that, like Mansfield’s last story, ‘The Canary’, was written when she herself had less than six months to live.

In this verse, there’s no rhapsodizing on evening stars bursting out at sunset over dark gum trees, as happens in the short story. ‘The Wounded Bird’ has a powerful and grim narrative, and Brooke Singer’s lovely rendering makes me impatient to hear what the other eleven tracks on Yates’ Mansfield project have come up with.