William Dart laments the songs that had to be left out of previous programmes ... but makes amends. 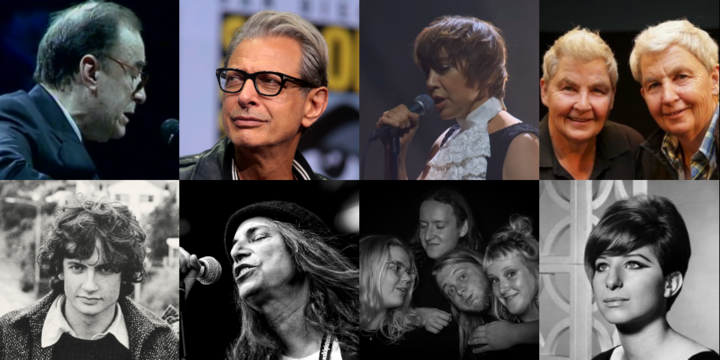 With so much music around today, who has nearly enough time to listen to it? This can be a cause for some despair and I have been known to call on our Kiwi Engelbert, John Rowles, to voice my plea.

In this penultimate programme of the year’s 48 half-hour New Horizons, I’m determined once again to let loose with some of my frustrations and regrets. If I only had time, or let’s say more time, so many songs would have had more airplay and others — many others — would have survived through to that final playlist.

Back in July, paying tribute to the late Brazilian musician João Gilberto, I sampled his giving Gershwin a bossa nova ride in 1977, with the best West Coast studio musicians that Warner Brothers supply.

Compiling the programme, however, it had a competitor, recorded four years later. This time, working with an all-Brazilian team of Caetano Veloso, Gilberto Gil and Maria Bethânia, he set his sights on a 1930s standard by Gerald Marks and Seymour Simons.

The ballad ‘All of Me’, in the hands of Ruth Etting or Billie Holiday, became an almost unbearable heartwrench. This time round, however, Gilberto keeps it sleekly urbane with a lean and finely sliced sound that comes across like the musical equivalent of cuisine minceur.  That is, until Johnny Mandel brings in a wash of studio strings.

But is it necessarily as light and frothy as it seems on the surface? Knowing the propensity of these Tropicalia musicians for irony and social comment, perhaps their version of ‘All of Me’ is a little more than just a love song.

Surface elegance can be deceptive. When Greg Kurstin and Inara George of The Bird and The Bee took to the songs of Van Halen back in August, one occasionally felt the barbs of gentle critiquing and deconstruction.

Inara George is an extraordinary singer, as witnessed by her 2008 song-cycle, An Invitation, put together with Van Dyke Parks. Now, single-handedly, on just one track, she makes Jeff Goldblum’s new lounge album spring to life.

Goldblum’s latest, titled I shouldn’t be telling you this, is dealt out with the same sense of breathless campery that the American actor spins on TV chat shows. His keyboard stylings with his Mildred Snitzer Orchestra are slick and considerably more convincing than his singing.

Not surprisingly he lines up guests for vocal spots. But the likes of Sharon Van Etten, Anna Calvi and even Fiona Apple don’t really work for me. Apple is particularly disappointing in one of the last songs that the great Billie Holiday recorded — ‘Don’t worry ‘bout me’.

Well there’s no worry at all with Inara George, picking up this Sonny and Cher hit from 1966 and having droll deadpan fun with its sometimes bizarre images.

I was very aware back in October that my programme of singing sisters, leading up to Tegan and Sara’s new album, would inevitably have some grave omissions. It did. And I realized it back then, although it was those ticking minutes that prevented my including our own Jools and Lynda Topp.

The Topp Twins are now a media institution in this country with their reliably entertaining TV work. But there was a time when music played a bigger role in what they did.

From their very early days sharing songs on a women’s collective LP with the likes of Māhinaarangi Tocker, they became popular EMI recording artists, writing and singing songs that combined twang and punch, with yodelling on the side.

Their 2001 album Grass Highway is the latest to move from shelf to CD player in my house, and, despite the warm fuzzy tinge to a number like ‘New Zealand Icon’, it’s a song with something to say.

And it’s not all in the words, with backing musicians like Martin Winch on guitar, Billy Kristian on bass, Glen Campbell on pedal steel and Stuart Pearce dishing up some splendid honky tonk on those ivories.

David Pine is one of the singular voices of New Zealand music, known best as a bandmate of Matthew Bannister in the Sneaky Feelings line-up. With a CV that includes high ranking diplomatic posts in the Philippines and Malaysia, Pine’s also a thinking person’s songwriter.

Like Bannister’s recent Rubber Solo tribute, Pine’s latest album, Uneasy Listening, recorded under the moniker of The Bleeding All Stars, is mostly a one man affair. And Like Bannister, Pine makes a Beatles connection in the imaginary hereafter of his song In Beatle Heaven.

But, having always had a soft spot for the ukulele, I was drawn to another track titled ‘Uketasia’.

In fact, for some months, this was going to inspire a whole programme devoted to the ukulele, but somehow it didn’t happen.

Maybe it was for the best, as ‘Uketasia’ goes quite a bit beyond George Formby or the various ukulele orchestras that I would have used. Wry and wistful, set in deep South bossa nova country, the intrepid David Pine sets off in search of lost tunefulness.

How could one not be aware that this country is getting some distinguished musicians visiting next year — Randy Newman in February, Laurie Anderson in March, and Patti Smith in April.

Smith, who hasn’t released a studio album since 2012, was coaxed this year by film director Alfonso Cuarón to participate in a CD that offers reflections and reactions to his Oscar winning film Roma.

Her contribution was a new version of her song ‘Wing’, which appeared, almost a quarter-century ago, on her Gone Away collection. Back then, it was very much a guitar-driven affair — after all this was the album that included her cover of Bob Dylan’s ‘Wicked Messenger’. And it wasn’t difficult at the time to hear her laconically drawled lyrics as another nod to Bob.

Twenty-three years later, Smith’s voice is as sweet as it will ever be, floating on electro-gleam clouds that seem the perfect setting for this ballad of eternal optimism and hope.

I must admit to having considerable fun in September, navigating around a big wide wonderful world in music. But once more, thanks to the implacable glare of that clock-face, I didn’t explore quite as much of the globe as I wanted to.

While I got as far as Scotland, I didn’t get the chance to go south, cross the border, and play the charm school pop of the band Penelope Isles.

Its first album, Until the Tide Creeps In, now out on Bella Union, has the label promoting it as crisp and woozy, blissful and biting, all of which are in evidence on its opening track, ‘Chlorine’.

While the accusations of its first verse fit with the band’s description of the song as depicting a heartrending family divide, the second verse goes a little off-kilter, and delightfully so, from the moment of jumping in a swimming pool with clothes on.

OK, the lyrics do offer a bit of a deciphering challenge. But for me, the prime appeal of this song is the tight musical knit of it. With harmonies flying in all directions, one could feel insecure, but Jack and Lilly Wolter run a tight band and there’s no need to worry.

And after you’re left almost smelling the chlorine at the end of its second verse, relax and enjoy the savvy musicianship of the band’s closing instrumental.

I’ve become a bit of pushover lately for the Australian Teensville label, a company that describes their catalogue as making the world a little groovier 80 minutes at a time.

It’s good to see their website telling us that two of this year’s releases — Let the Good Times In: Sunshine, Soft and Studio Pop 1966-1972 and Men of the Moment: 1960s Pop Gems written by Roger Greenaway and Roger Cook — are almost sold out.

The first has no shortage of the obscure flowery pop delights promised, with elaborate arrangements, lilting melodies and, let’s not forget those alluring harmonies. All this as well as a real and unexpected rarity. The mono recording of a double tracked Barbra Streisand trying, in vain, in 1968, to conquer the pop charts, singing ‘Our Corner of the Night’.

The writers of that song George Goehring and Stan Rhodes are just a little too clumsy in their cleverness to get the Bacharach seal of approval. But then the more straightforward pop of Roger Greenaway and Roger Cook didn’t need it. Who would, when you pen songs that fueled the careers of Blue Mink, The Fortunes, The Hollies and Cilla Black?

Teensville’s new collection of the two Rogers lets us hear some of their misses, and what misses they are. Jon Britten’s 1968 single, ‘Once I Had a Dream’, is a wannabe showtune waiting to find a home in musicals yet to be written.

Britten himself, 50 years on, remains a mystery, but you’ve got to admire the West End heft of his vocals. Along with one of those inventive arrangements, from plucking pizzicato to full roar, that make the extensive field of 60s pop such a happy hunting. That is, if you have time.

'The Sidewinder / The Beat Goes On' (Bono, Morgan) – Inara George, Jeff Goldblum & The Mildred Snitzer Orchestra
I Shouldn’t Be Telling You This
(Decca)

'Once I had a dream' (Greenaway, Cook) – Jon Britten
Men of the Moment: 1960s Pop Gems Written by Roger Greenaway & Roger Cook
(Teensville)