American singer-songwriter (and painter) Tom Russell describes himself as a blend of Jack Kerouac and Johnny Cash. William Dart finds him in top form on his new album October in the Railroad Earth. 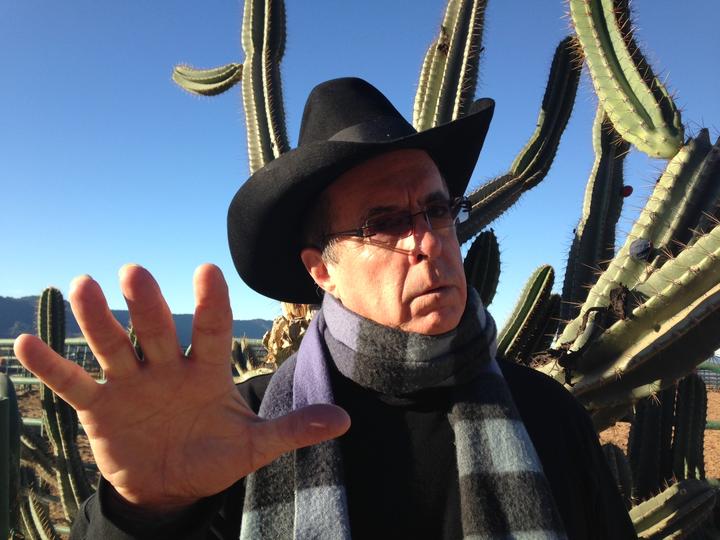 There’s nothing like an audience murmuring and fiddles tuning to crank up expectation. Especially when the music starts with a chord that’s just got to go somewhere:

You’d expect the Beatles to have a palpable curtain-opener for an album as inherently theatrical as Sgt Pepper’s Lonely Hearts Club Band.

Pepper came out in May 1967 and by the end of that year, The Rolling Stones, too, seemed to try just that little bit harder to launch their new album, Their Satanic Majesties Request.

It starts off with a pianist sounding as he’s doing a slow practice run on the Russian Dance from Stravinsky Petrushka, in between blasts of instrumental anarachy, and ends up, eventually, in something of a sing-along by Mick and the Boys.

American songwriter Tom Russell has always been extremely savvy when it comes to opening an album, but with nothing of the Brit bristle of the Beatles and the Stones.

Back in 2001, how easily his Borderland CD took over the stereo and drew us in. Atmosphere simply oozed out of it, from its very first track.

Russell is one of the great storytellers amongst songwriters. He’s happy to string out a tale and keep excessive Dylanesque imagery at pen’s length.

His songs and his writing are imbued with the spirit of American literature – Jack Kerouac in particular. And sometimes, hovering behind his work, is another great American tradition: that big flickering screen.

To introduce this Borderland album he used the 1958 Orson Welles movie Touch of Evil as a kind of cinematic frame for a dysfunctional relationship being laid out. It’s set with a canny ear and, if he were a cinematographer and working in images, I’m sure he’d have impressed Welles’ camera man, Russell Metty.

There’s an early touch of Oliver Steck’s mariachi brass, and then, in the flow of the song, the Tex-Mex ambience of Joel Guzman’s accordion.

Tom Russell’s recording career dates back to the late seventies and his two albums with Patricia Hardin. Solo, you can track him back to 1984 through well over 30 albums, featuring music that reveals a man who takes the business of song-writing very seriously — so seriously, in fact, that in 2002 he and Sylvia Tyson collected together a book of tasty quotes from the men and women who write the songs.

Russell claims, as a songwriter, that he’s always felt as if he’s on the outside looking in, telling the stories of others (and sometimes himself).

There’s always a dispassionate stand taken, sometimes gruff and sometimes stoic. He likes to explain this as tying in rather neatly with his interest in criminology – an interest that led to a degree and academic employment.

This background certainly proved a good excuse for a song in 2009, lively and personal enough for him to reprise it three years later, in concert, with the Norwegian Wind Ensemble.

We got to appreciate more of Tom Russell’s own life and background in his 1999 album The Man from God Knows Where, a sort of country song-cycle spun around family history – a lineage that stretched back to the singer’s Irish forebear Patrick Russell and his Norwegian one, Ambrose Larsen.

This highly organized concept album was the perfect excuse to marshal a host of guest singers and instrumentalists, who were able to add lashings of Nordic and Celtic colour with Hardanger fiddle and uillean pipes.

The music ranged from original songs to traditional ballads, including Iris DeMent offering ‘Poor Wayfaring Stranger’ with a coming together of Norway and Ireland behind her.

An even more ambitious album, titled Rose of Roscrae came out as a double album in 2015.

This was, in essence, a two-an-a-half hour folk opera. It told the story of a young Irish boy emigrating to American and, during the course his picaresque adventures, discovering the wealth of music to be found in his new country.

Being an opera, there was just cause for having an overture, so why not?

It’s set off by the voice of Jimmie Dale Gilmore, and taken over by Russell narrating the story over a familiar tune from his friends in the Norwegian Wind Ensemble.

Along with fine original and traditional songs featuring his friends Eliza Gilkyson, Maura O’Connell, Joe Ely and Gretchen Peters, Russell also called on a Swiss Yodelling Choir and — if it doesn’t sound too gothic — voices from beyond the grave.

These are heard in a touching collage, introduced by the octogenarian Ramblin’ Jack Elliott and including clips from the late Jack Hardy and Tex Ritter – a track titled ‘Cowboy Voices beyond the Campfire’.

Tom Russell’s new album October in the Railroad Earth may not release its rewards as immediately as some of his previous outings. But then that’s part of the mystery, and had Russell confessing that he painted one of his best portraits when groggy after dinner.

For this man, there’s a magic entailed in art and music that’s not in the job-like task of writing. Little surprise that he likens both painting and music to acts of dancing: acts that always attempt, ultimately, to tell a story.

He opens the disc with the title song, ‘October in the Railroad Earth’, based on a short piece of Jack Kerouac prose. And it manages to be more about Kerouac than by him.

Thanks to the initiative of the small American label, Hanover-Signature, keen on preserving a few vital specimens of Beat Generation culture, we can hear Kerouac giving us his words. A curious outing this, recorded in 1958, and set against the jazz piano of Steve Allen.

Tom Russell takes this, written as a piece of so-called spontaneous prose, and puts it in the wider context of the man and his life.

It’s musically regimented as one might expect, to become a song, but, at its core, it’s still an appropriate ramble through a down-and-out California-style existence in 1952.

There are some strong and memorable stories on Tom Russell’s new album and that song is just one of them.

Another, a jaunty Tex-Mex waltz, takes its title from its main character, Isadore Gonzales. It’s a rather poignant tale of a Mexican cowboy who rode with and eventually died in Buffalo Bill’s travelling show, ending up buried in Bristol, UK, rather than his homeland.

Local colour for this character is beautifully etched in by an uncle and nephew team from San Antonio with the name of The Texmatics. One plays bajo sexto, the other an extremely agile accordion. And while the story of the song is rather mournful, Russell seems determined to find some grim and doubtlessly ironic humour in it.

Other moving stories on Tom Russell’s new album include ‘Red Oak, Texas’, the musical robustness of which acts as a counterpart to a heartrending tale.

And Russell, the literary man, rather cleverly makes an English war poet from a century before an integral link in the story.

When Tom Russell moves away from other folks’ stories such as these, plucked from life itself, he comes up with a song that touches me the most deeply of any of the album’s 11 tracks.

Perhaps the singing partnership with Eliza Gilkyson plays a strong part in its appeal, but the song itself resonates on levels beyond the literal.

It’s about more than just lovers, lost in the American highway system, overlooked by a hawk and guided, indirectly, by satellite. The satellite’s the clue, in fact, in a song that’s about being and identity.

Or, as Russell puts it in his website liner notes, is this his Global Positioning System song? A positioning in which the only proper description of where he stands is … as an artist and a musician.

'Sing This All Together' (Jagger, Richards) – The Rolling Stones
Their Satanic Majesties Request
(Decca)