The world of bossa nova is much poorer with the loss of the great João Gilberto, who passed away on the 6th July. William Dart pays tribute to the Brazilian master. 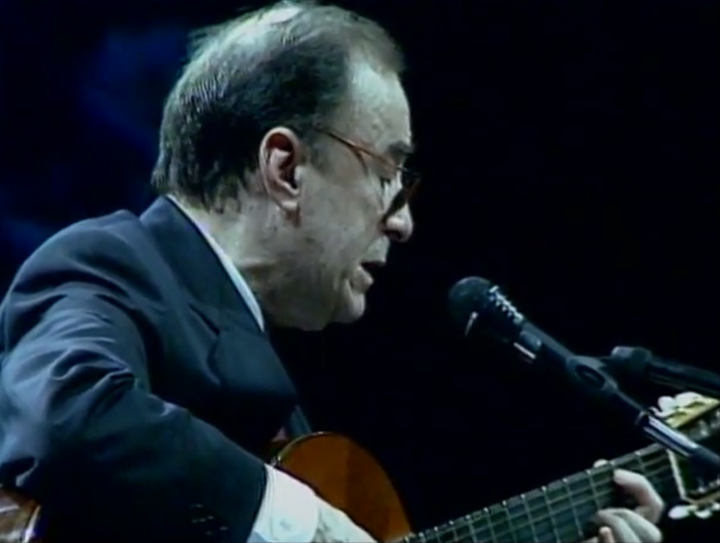 Over the last few days I’ve been revisiting the music of one of Brazil’s most distinguished sons: composer and songwriter João Gilberto, who passed away earlier this month at the age of 88.

Here's his very first adventure into the world of bossa nova — the song 'Bim Bom' recorded in 1958.

What makes this song such a beauty, I think, is its inspiration. That beguiling bossa nova rhythm comes from Gilberto admiring the swaying walk of some laundry women at work, carrying their baskets along the river bank. The result something akin to a musical male gaze.

The immediacy and the naturalness of it, the easy flow from life to art, is something to be envied. The same naturalness that saw the bossa nova itself grow out of the infectious samba.

As Gilles Peterson and Stuart Baker described it, it was music that reflected a period of optimism in Brazil. Its beautiful melodies, angular and complex harmonies, sophisticated word-play and poetic lyricism made it distinctly modern, cool and cosmopolitan. There was an urbanity here that fitted in with new apartment living in rapidly expanding major cities.

João Gilberto was just one of bossa nova’s minstrels. His first few albums, crossing from the 50s into the 60s, feature song after song by his older colleagues: Antonio Carlos Jobim for a start.

And how could he possibly not pay homage to Luiz Bonfá, with one of his numbers from the international movie hit of 1959: Black Orpheus.

Bonfá would inspire a beautifully understated instrumental tribute from his friend Gilberto, a guitar solo with the warmest of fuzziest titles: 'A Hug for Bonfá'.

How effortlessly Gilberto lays down a groove here, a groove that could go on sequencing away for ever and ever. Music for listeners to lose themselves in.

That is, unless they’re distracted by the exceedingly strange percussion — a woodblock that redefines offbeat.

There was the same feeling of falling harmonies and unexpected firings of colour when Gilberto covered one of the most popular songs of his friend Jobim, titled 'Insensatez'.

In English, it ended up being sung by everyone from Ella Fitzgerald and Eartha Kitt to Robert Wyatt and The Monkees, translated rather loosely as “How Insensitive”.

Listening to Gilberto here, classical pianists will be struck by the song’s nagging proximity to Chopin’s E minor Prelude, while other ears will be drawn to the man’s deceptively casual vocalizing and its rather quirky musical setting.

Inevitably, America was quick to discover the commercial potential of this new music coming out of Brazil.

Gilberto’s albums received Stateside releases, with titles such as The Boss of the Bossa Nova.

But some American musicians connected more seriously with the soul of this elegant music. Saxophonist Stan Getz was introduced to bossa nova by guitarist Charlie Byrd, on returning to the States from Brazil and, in 1963, had a hit with his cover of 'Insensatez'.

Then in 1964 came the crossover album that would define a new genre. Titled simply Getz/Gilberto, it brought not only these two men together, but also Jobim and, as vocalist, Gilberto’s wife Astrud.

The album spawned a hit with a number that became a calling card for the singer. The longer version on this album, however, is radically different. It’s introduced by João Gilberto, singing in Portuguese, with chiming piano from Jobim and eventually the ruffled, throaty sax of Stan Getz. Making for five minutes of utter bewitchment.

There are no original songs by João Gilberto on Getz/Gilberto and it doesn’t matter. His musical footprint is there for all to hear, through his singular vocals and guitar stylings.

Curiously enough, of the eight tracks, six have been written by Jobim, including the popular 'Desafinado' (“Out of Tune”), which Gilberto had already recorded on his very first album back in Brazil.

João Gilberto had a unique way with a song and sometimes his choice of song could be surprising as well. His 1977 album, Amoroso, was recorded in the States, with Claus Ogerman contributing arrangements that are sumptuous alongside what Gilberto had had in his home country. But it’s a very discreet lushness, perfectly tailored to the vocals that float above them.

Gilberto offers us four classic Jobim tunes here, along with a Gershwin standard that finds him playing some rather devilish tricks with the song’s phrase structure. He comes out with some extraordinary pronunciation, even rivalling that of the late Carmen Miranda and, most importantly, manages a nonchalant rubato that wouldn’t be amiss in a Chopin Nocturne.

Some of the best musicians in West Coast jazz circles are here, including, rather prominently, the distinctive sound of Bud Shank on flute.

Listening to the music of João Gilberto, you’re struck by its essential calmness.

If the British invasion of the early sixties had brought America a brash blast of R&B, then the Brazilian one around the same time brought something altogether more relaxed.

However, there were tougher voices coming out of the bossa nova movement by the late 60s — musicians like Caetano Veloso, Gilberto Gil and the group Os Mutantes, who banded together under the umbrella of the Tropicalia movement, telling us that Brazil was not the paradise that so much bossa nova suggested.

Veloso and Gil’s activism would see them fleeing the country at one point, and the trenchant politics and musical radicalism of Tropicalia were a far cry from the Bachelor Pad ambience that the gentle, wafting bossa nova of Getz and Gilberto could be seen as promoting.

I last featured Veloso in New Horizons seven years ago, based on his historic concert with David Byrne in Carnegie Hall.

His ease at slipping between genres is quite something, reaching a high pitch of virtuosity in his 1969 white album, recorded between being released from a Brazilian prison and decamping to Europe.

There’s everything here from psychedelic rock and tango to Carnival revelry, but a song like 'The Empty Boat', with an arrangement very relatable to what Gilberto often had behind him, has a bleakness that has seeped into the music from the politics of the time.

Caetano Veloso was a happier man in 1981 when he and Gilberto Gil teamed up with João Gilberto for an album titled simply Brasil.

It was short and to the point, with only six tracks adding up to less than half-an-hour’s music.

It even included a slightly weird visit to 1930s Tin Pan Alley for the ballad 'All of Me' ('Disse alguém').

The other five songs on the Brasil album put the emphases in on homegrown, and the music of the great Brazilian musicians who had gone before them.

Songwriters like Dorival Caymmi, who writes so joyously of the delight to be had fishing on a Holy Wednesday.

In the last count, remembering João Gilberto, one returns to his very special partnership and Jobim; particularly in those songs that we first heard just over half a century ago on that coming together of Gilberto with Stan Getz.

Five years ago, the song 'Vivo Sónhando' turned up unexpectedly on an album titled Tudo, from none other than João Gilberto’s daughter, Bebel.

Putting their two versions side by side, one can sense a gift being passed on, over these 56 or so years. And it’s Bebel Gilberto who perhaps best catches this man’s distinctive talent, praising him for changing Brazilian music, ever seeking different chords in classics that he’d playing for years.

But, most importantly, seeking for perfection, something that could be better, a version that no one had thought of before.