For William Dart's solstice, fate has brought together two men who both play fiddle and whistle. One, John Hartford, now sadly no longer with us, had a yen for bluegrass; the other, Andrew Bird, is drawn more to the art of soundscaping. 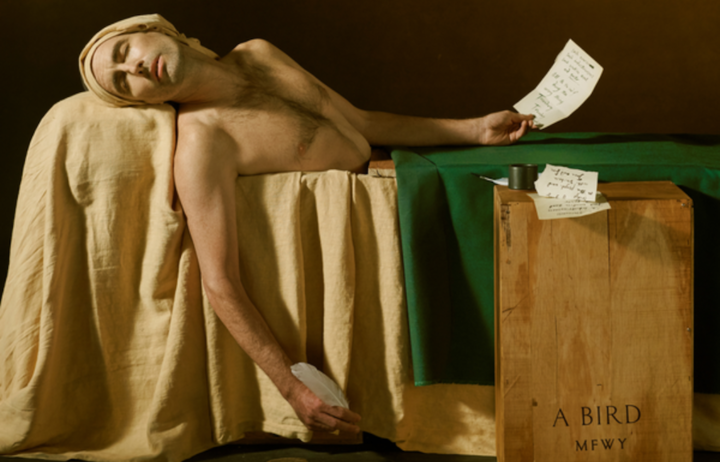 Here's Rita Tushingham, fresh from Manchester and feeling decidedly dejected in Swinging London, sick of waiting for her friend.

It’s one of a number of touching songs by John Addison and George Melly from the 1967 Desmond Davis film, Smashing Time.

[Please excuse the still frame that YouTube has chosen to feature for this video below – Ed.]

These days I find myself waiting – sometimes very patiently – not for friends but for new music from artists who have been keeping me on tenterhooks for longer than I would like.

But now, thanks to two unexpected releases, there’s cause for jubilation.

The waiting, however, can be tough. In fact, sometimes desperation tips to such a low point that I’m more than happy to accept new music from the grave, as it were.

This has happened in the case of the late John Hartford who passed away in 2001, not too long after taking part in the Coën brothers movie O Brother Where Art Thou.

He was a laconic master of the ballad of observation, the best known of which enjoyed a healthy stint in the charts, thanks to Glen Campbell, who gave it a juiced-up ride on his Bluegrass Express

Now, thanks to a new collection of Hartford’s radio performances, singles with the Ozark Mountain Trio and solo demos, we can hear 'Gentle on my mind', fresh from the songwriter’s notebook.

John Hartford himself would studio-record 'Gentle on my Mind' for his second album, Earthwords & Music, in 1967.

If the story that Glen Campbell caught up with it by hearing Hartford singing it on the radio is true, then it must have been a bit of zoom to the studio in May of that year to make his recording.

But let’s not be pernickety about this. The connection might well have been more direct than a casual radio catchup. Hartford was Campbell’s banjo man and perhaps it was all a matter of insider knowledge, maybe through hearing the demo I’ve just played.

Is this new collection of Rare and Unreleased John Hartford, titled Backroads, Rivers & Memories, more for hardcore fans, I do wonder? Although Skip Heller’s extensive essay in the CD booklet does make much of another Hartford song being la chanson juste on the soundtrack of the recent Lady Bird movie.

It would have been enough, I would think, to have its writer break into a crinkled smile up there in Bluegrass Heaven.

The rather cozy Nashville ambience of that song is a long way from the raw banjo and baritone demos on the new collection, a sound which Hartford wasn’t ashamed to introduce himself with on his very first album in a track that’s perhaps more literary than musical, a witty minute or so, pondering the demon of Commercialism.

The strongest tracks on Backroad, Rivers & Memories are, in fact, the demos.

For me, the man doesn’t really emerge as an individual in three live radio broadcasts with Pat Burton and Nat Bray. And the eight rescued singles from the Ozark Mountain Trio are pretty standard bluegrass, although we do get the chance to hear Hartford on fiddle.

And listening to 'Corrina', a song that some know from Bob Dylan’s early years, you’re struck by what sounds like a pretty dodgy recording, miraculously patched up by using multiple copies of the original disc and some pretty extensive groove cleaning.

No, the Hartford gold lies in those matter-of-fact, demos of familiar songs such as 'Eve of my Multiplication' and 'California Earthquake' as well as some that he never got around to putting onto disc: throwaway snippets of perspicacity, such as 'Grownup Man', its verses separated by a hint of the freewheeling vocalese so much a part of Hartford’s glorious 70s bluegrass outings in his 1971 Aereo-Plain album.

John Hartford, like Mark Twain and other American satirists, is quick to look at his fellow man and point out follies and foibles.

Another song, 'Like Unto a Mockingbird', sounds as if it might be Septimus Winner’s well-known nineteenth century drawing room tune, 'Listen to the Mockingbird'. But it isn’t. Rather, it’s a devastating dig at our tendency to follow blindly the fashions, fads and philosophies of the time. The musical bonuses include a lively banjo shuffle and the singer’s signature whistling.

From one fiddler who’s happy singing with the pluck of a lone banjo, to another who, thanks to the wonders of dubbing technology, can set himself against lush banks of strings, concocted in the spirit of a sonic Busby Berkeley.

American musician Andrew Bird is a man torn between songs and soundscapes.

In 2017 I featured his Echolocations projects which were something like the musical equivalent of plein-air painting. An album to explore and resist – if you can – total immersion. That is, if you’re happy to do without anything remotely connected to a song. The geographical setting was an integral part of the music, with this particular track being recorded as Bird wades in the Los Angeles River under the Glenvale-Hyperion bridge.

Andrew Bird’s new album is suffused with the same quirky humour that had him toying with the German poet Heinrich Heine and composer Beethoven way back in the 1990s.

Its eye-catching cover has him playfully placing himself in the big parade of art and political history. He’s playing the murdered Jean-Paul Marat in the bath as caught by the painter Jacques-Louis David.

The very title of the album — My Finest Work Yet — exudes an almost bragging optimism, and, with soundscaping well behind him, it’s just ten songs.

In fact, as he said in a recent interview, the thing that gets him up in the morning is the idealistic notion that maybe he could get America to sing the same tune, and that you might actually unite a community through a song.

If that’s the hope, then the ten numbers of My Finest Work Yet would be somewhat challenging for a community sing-along. But then what else might one expect from a man who, when it comes to listing his favourites, has Miles Davis and Herbie Hancock alongside Bobbie Gentry and William Bell?

He takes us back into the mists of mythology for the opening track, 'Sisyphus', and it would take a nimble tongue to get around its slick word-play, with enough devious rhymes to get it onto a Broadway stage.

For those who found Richard Wright’s 'Sisyphus' on the Pink Floyd album Ummagumma too much on the grandiloquent side, Bird delivers his stone-burdened hero with a lightness that makes one suspect the crucial rock could well be a wound-up ball of gossamer.

For fans of Andrew Bird’s fiddling, his trusty violin sets off the song 'Olympians'.

References here are more to do with top-level sports than ancient Grecians in a song that discreetly touches on issues of political and personal paranoia in 2019. There's a spinning top chorus and a delightful play-around with a word not often encountered in your run-of-the-chart pop song … "anathema".

Andrew Bird can’t resist slipping a reference to the Rosetta Stone into the most direct and un-tricky track on his new album.

'Cracking Codes' is a game-playing love song, short, sweet, and to the point.

Once you get past his strummed fiddle, it’s Tyler Chester’s piano that provides the anchor, here and there effectively mating with Bird’s whistling.

Who knows, perhaps the album cover, with its picture of Bird as the murdered Marat, has the answer for this song. Maybe its lyrics are amongst the surviving sheets of paper lying around.

And if so, we're lucky that he got them recorded.