Jan Hellriegel - Sportsman of the Year

Jan Hellriegel’s new album, autobiography, and podcast come with the eyebrow-raising title, Sportsman of the Year. William Dart looks into the mystery. 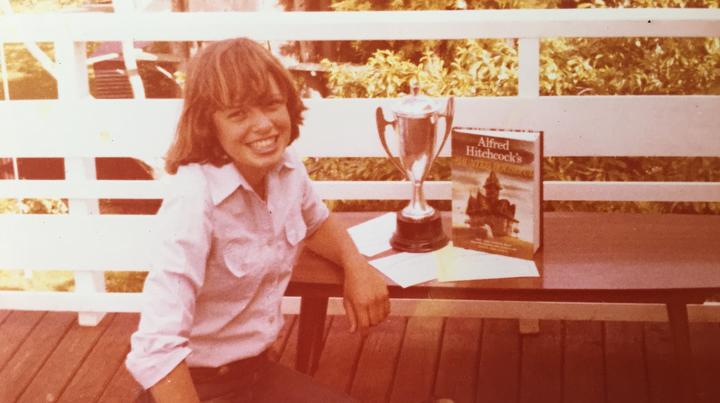 RNZ's Podcast Sportsman of the Year

Jan Hellriegel’s first single 27 years ago was an energy-packed rocker, well able to compete with anything the stadium boyz might be able to whack up.

And it doesn’t pull punches when it comes to what’s going on in the cracks and crevices of our society.

Jan Hellriegel said at the time that she was very much in step with the women’s music movement burgeoning around her. Within a year she’d be on the roster for Wellington’s Composing Women’s Festival.

In fact, she’d taken quite a stand as a woman musician back in the eighties, forming the all-woman band Cassandra’s Ears.

The other day I came across a particularly inane press release for the group’s Private Wasteland EP, which claimed that Hellriegel and her musicians’ main priority was having lots of fun.

Well, they probably did, but there was some very serious songwriting going on here: in numbers like ‘Workers Lament’ which may nod to the jangle pop of Flying Nun’s Look Blue Go Purple, but comes with lyrics that dig a little deeper than that group’s joysongs.

Incidentally, I can’t resist outing the band member responsible for the backing vocals in that song: it’s Zan McKendree-Wright, a mezzo-soprano whom I’ve enjoyed over the years on town hall and other stages singing Mendelssohn, John Adams and Gillian Whitehead.

In 1991, with a solo Jan Hellriegel on its books, Warner Music put the power of the multi-national dollar behind her.

Her 1992 EP (released at the same time as her first album It’s My Sin) had the American J. D. Souther co-producing one of its songs and its generous six tracks ended with an interview.

With upfront honesty, she explained that the title It’s My Sin represented her passion for music and the sacrifice she makes just to do it.

This honesty never really went away during her time with Warners, which brought forth two albums, It’s My Sin and Tremble.

But one of my favourite Hellriegel songs was on neither but came as a 1997 single with the title ‘Sentimental Fool’.

Joel Haines gets up a guitar strum and she’s off with a tune that could be a karoake killer. Mark Tierney of Strawpeople shares writing credits and adds some power organ.

Jan Hellriegel had every right to be proud of her third album, All Grown Up, which appeared in 2009, a full 14 years after her previous one.

Released on her own label, Blind Date, it rustled up an enthusiastic press response. The most familiar line that came out was how important the collection had been for the musicians who helped her to get together this baker’s dozen of songs, built on events and people in her life to this point.

There’s a new and darker voice of experience to be heard from its very opening track, ‘10 Years and 47 Minutes’, a very literal way to summarise a relationship.

And you can hear it in the music – in the way the song seems to revolve in ever-diminishing circles until it gets into a bright pop stride with the words “Let us say goodbye”.

It’s sharply observed, right down to the kiwified mention of German Sturm und Drang. On the musical side, listen out for Eddie Rayner’s smooth piano stylings and producer Wayne Bell, playing everything from guitars and loops to … loads of other stuff.

There was another cry of empowerment from Jan Hellriegel in 2013 when the album Lost Songs appeared with its assortment of demos, live recordings and such, some from her 14 years in the post-Warners wilderness.

Two of the most interesting had Australian connections, one being a 1998 preview of a song yet to come, put through the mixer.

This song would appear on All Grown Up, re-jigged and re-titled ‘Heaven is Here’, an endearing pop waltz, with a smidgen of gospel in its veins.

It’s difficult to imagine Jan Hellriegel’s music without at least a smile somewhere in the mix.

In fact, it’s the spirited good humour of the woman that makes her new autobiography a compulsive read, and its accompanying album into an obligatory listen.

She spins a host of sit-down-and-listen yarns in Sportsman of the Year, as she unfolds story after story about herself and her career, tied up in 220 pages that include all the information and music credits that you need to enjoy the disc.

And you can have a preview, for free, in a series of podcasts, in which Hellriegel describes her suburban philosophy, in bubbling good form.

A song like ‘Love and Conviction’ takes us back to times when she worked in her dad’s West Auckland panel-beating shop, as well as using the premises as rehearsal space for Cassandra’s Ears.

There were other less enjoyable jobs along the way and they’re caught in this driving 12-bar blues of a trip, driven by the drums and programming of producer Wayne Bell. Nick Atkinson and Tim Stewart of Hopetoun Brown provide fanfared signposts along the way and, towards the end, Brett Adams lets his guitar go for a leather-jacketed strut on the wild side.

When Jan Hellriegel describes her new autobiography as her suburban philosophy, she means West Auckland suburbia and she’s a proud Westie suburbanite and mum. Just weeks ago, she was chuffed to be inducted as an alumna of Henderson High School.

Both the new book and its songs have a directness and candour that are totally refreshing. The same candour that has resulted in some slightly rambling interviews here and there.

So, when she unfolds some of her personal insecurities in the chapter and song titled ‘Ice IV’, she doesn’t hold back.

We hear about a cruel story in The Listener a few decades back, for which she shared a cover with Linda Topp and Rima Te Wiata; about an uncontrollable coughing fit during a Nana Mouskouri concert; public Bible readings with a runny nose; not to mention a Flying Nun rejection letter.

If I had to pick a personal favourite from Sportsman of the Year — and it’s difficult — it would have to be the title song, inspired by her winning a gender-unaware sports award at Intermediate School.

It’s a song that sneaks up on you, over chords that take me back to John Lennon’s song ‘Isolation’. Hellriegel takes a sobering look at the different worlds of a 12-year old and a 52-year old, giving out a philosophy of clear-eyed survival here that’s heartily supported by her mates of the Viking Singers, including Ben King, Sandy Mill, Dianne Swann, and Rima Te Wiata. All of whom assure her that “…these are your power years”.

I was at RNZ, recording a programme on Delaney Davidson and Barry Saunders. Jan Hellriegel just happened be around the corner in Studio B, putting down some songs for Music 101, with a small band sonically marshalled by Andre Upston.

One was a real earworm. A goosebumpy and slightly swampy version of the album’s opening track, ‘Hound Dog’.

It may have nothing to do with Elvis Presley, but it’s an irresistible introduction to the staunch Jan Hellriegel and her equally staunch music.

Listen to just a few lines and you’ll want to know more about her world.

Watch the video and, dammit, you’re going to want to know just where she got her fabulous coat of many colours from.

'The Way I feel' (Hellriegel) – Jan Hellriegel
It's My Sin
(Warners)