From Studio to Stage

William Dart looks at two albums that became shows and one show that became an album… Anaïs Mitchell’s Hadestown and David Byrne and Fatboy Slim's Here Lies Love the former; Linda Thompson’s My Mother Doesn’t Know I’m On the Stage the latter. 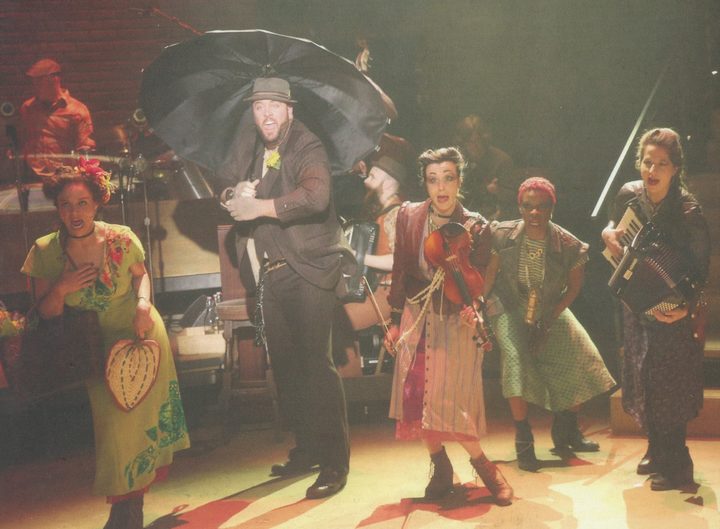 I was airborne recently, but my trip was much much shorter than Paul McCartney’s BOAC flight from Miami Beach to Moscow as recounted in his song "Back in the USSR".  And the fancy new mega-version of The Beatles double White album wasn’t on the playlist.

But there were unexpected compensations, even allowing a tingle or two of guilty pleasure.

Mamma Mia! Here We Go Again is not a film that I would ever have searched out but, captive at 34,000 feet, with two-and-a-half hours to get through, it was a holiday bonus, complete with Mediterranean vistas and tune-drenched popsicles, often with lashings of Greek dressing on the side.

And what an old-fashioned treat it was, summed up in the truly stellar visitation of Cher, here dueting with the rather mixed down Andy Garcia.

I could easily go on rhapsodising on my six-mile-high ABBA fest, but instead I’ll be looking at projects which crossed the lights rather than the dateline: two albums which became shows and, in one case, a show that became an album.

I’m still torn between my two versions of Anaïs Mitchell’s Hadestown. The original 2010 studio recording was our first taste of the American’s update of the Orpheus and Euridice legend, performed by a who’s-who of alt.folk and country artists.

The journey from studio album to original cast recording is fascinating — this happened when the piece was opened out and re-jigged for an off-Broadway staging in 2016. And, as for choosing one over the other, well, it’s an impossible task. In fact, I’ve had special joy in tracking down just what happened to the 2010 songs six years later.

When we first heard "Doubt Comes In", it was essentially a duet between Justin Vernon and Anaïs Mitchell, against some pretty sophisticated arrangements by Michael Chorney, who performed the same duties in the later theatrical outing.

This duet was radically re-delegated for the theatrical Hadestown. The opening verses are shared between the Fates and Orpheus, now played by Donnie Dauno, who just last month was Curly in a re-imagined Oklahoma, not afraid to salute a beautiful morning to his own guitar.

You can gauge the shift from studio to stage in Hadestown in the actual voices of the singers.

Nowhere more so than with Patrick Page, whose performance as the evil Hades, adds quite a few notches of sinister to what Greg Brown came up with back in 2010.

At the moment, with the show playing at London’s National Theatre, you can hear and see Page on the NT website and on YouTube, rehearsing a song that, in 2018, has a topicality that Mitchell couldn’t have imagined when she wrote it.

There are no walls or dark politics on Linda Thompson’s latest album titled My mother doesn’t know I’m on the stage.

It’s a love-letter to the English music hall, staged and mostly recorded in 2005 at London’s Lyric Hammersmith Theatre.  And this, like Mamma Mia 2 and Hadestown, must have been a star-studded night, drawing in everyone from Martha Wainwright, Cara Dillon and Teddy Thompson to veteran folkie Bob Davenport and actor Colin Firth, last seen as one of the bumbling putative dads in that Mamma Mia movie.

Thompson’s affectionate liner notes are all we have for an MC, and she herself sets the show rolling with a nudge, a wink and a song popularized back in the day by the celebrated Violet Loraine. All to the delightful combination of Michael Haslam’s piano and George Hinchliffe’s ukulele.

And gosh how the audience enjoys it.

The delights of Linda Thompson new album are many and various. If you want sweet, you’ll enjoy Martha Wainwright injecting some McGarrigle honey into Stephen Foster’s "Beautiful Dreamer". Thompson’s son’s Teddy struts through "Burlington Bertie" but I felt a little cheated as it was originally sung by Vesta Tilley, one of the great cross-dressers of the British Musical Hall.

But not all is lost. Justin Vivian Bond, a singer with his foot in both gender camps, comes up with Sophie Tucker’s "A Good Man is Hard to Find", resisting any cheap spoonerising.

I met up with Bond in the 90s, when he was one half of the ultimate kitschy lounge duo, Kiki and Herb, a cabaret twosome immortalized in essay by none other than Alex Ross.

This is a riotously live and lively performance, with Bond getting much mileage from an unexpected disaster with the straps holding up his bodice.

This wouldn’t be a Linda Thompson outing if there weren’t some trad folk on the songlist and Cara Dillon elegantly obliges with "The Lark in the Clear Air" to Sam Lakeman’s almost self-effacing piano.

Who needs critics when Thompson’s sleeve comments catch everything in two sentences. “Just listen to her voice,” she tells us. “She really is a lark."

I’ll round off by going local. 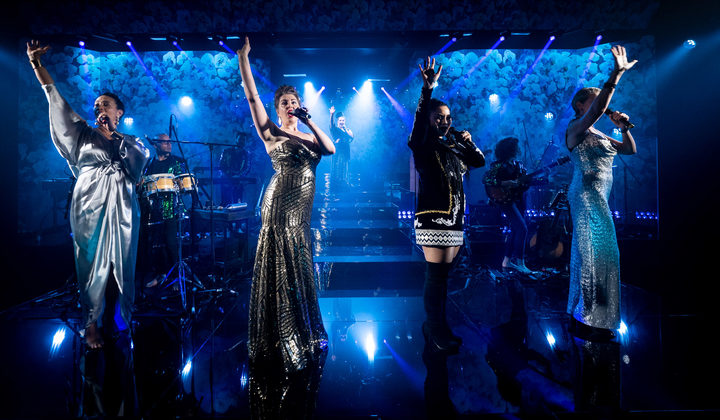 And from the moment when Ria Hall so fetchingly introduces this song-and-dance tale of the shoe-loving Imelda Marcos, it’s not difficult to surrender and sit back under the mirror balls for a vicarious evening at Studio 54, without having to board either plane or time machine.

Of course there are edgy politics at play here that could alienate the staunchly PC. But surely David Byrne, like movie director Douglas Sirk, is the eternal ironist. Didn’t he once say that he loved writing characters such as these so that he could indulge in corny clichés? And surely, he proposed, dancing and power made for a very similar state of euphoria?

At Auckland’s Q Theatre, euphoria flowed by the champagne bucket-full.

Music Director Robin Kelly may not have been able to rustle up the cute orchestrations of the original 2010 recording, but his five piece band pumps out enough exhilaration to make the tinsel curtains shiver in the sound waves.

The five women — Ward-Lealand, Hall, Villette Dasha, Colleen Davis and Sarah Nessia — glided onto Daniel Williams’ glittery stage, with all the moves and sways to order.

Ward-Lealand’s decades of experience meant she could inject just the right, almost Brel-like, poignancy into the song "When she passed by". And she revved up a hustle and a half with the band in "Don’t you agree". More so, I felt, that Róisín Murphy in Byrne’s original.

All five singers gave their music an individual stamp. Sarah Nessia might well have had some eyes misting over with Imelda’s childhood memories in the song "The Rose of Tacloban". And Colleen Davis’s fierce "Why don’t you love me?" took the show to a dramatic close . . . well until a boogie-ing encore was proferred.

Eyes and ears fell easily on Villette Dasha, wearing the most over-the-top of Elizabeth Whiting’s imaginative costumes and giving us the first meeting of Imelda and Ferdinand Marcos in the number "Eleven Days". Although, as it happens, the male characters somewhat slipped out of the show’s playlist which may, in a funny way, have made it more focused.

The five singers certainly assert women power in the delicious ensemble of "Ladies in Blue" under bubbling disco beats with Nutrasweet harmonies.

And they could party with just the right frenzy when the call came, almost as if it might have been 1999 in the kingdom of Prince. Ria Hall leads them in the uber-funky "Dancing Together", a gloating song which shows Imelda mingling with the greats — whether on canvas in the case of Matisse and Picasso or in the flesh, with Andy Warhol and Oleg Cassini.

Of course, it had to be reprised as the obvious encore, getting the audience off chairs and onto the dance floor, with Ria Hall letting loose with some of grit that she delivered on her own debut album last year, tributing in her own way, the late soul sister Sharon Jones who set us all partying eight years ago.

Listen to these songs and others by clicking "Listen" above.

'Back in the USSR' (Lennon, McCartney) – The Beatles
White Album
(Apple)

'Why do we build a wall' (Mitchell) – Patrick Page
Hadestown: The Myth. The Musical, Live Original Cast Recording
(Warner)

'I Might Learn to Love Him Later On' (Weston, Lee) – Linda Thompson
Linda Thompson Presents: My Mother Doesn’t Know I’m on the Stage
(Omnivore)