Last month, Tauranga singer Ria Hall carried off the Maioha Award at the Silver Scrolls. William Dart traces the musical and political path that led to her new album Rules of Engagement. 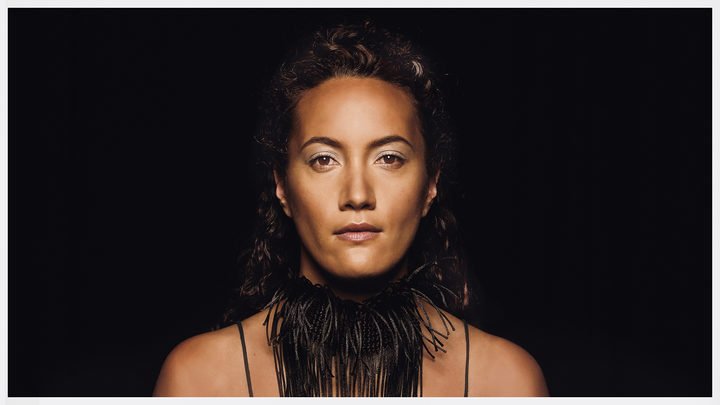 When I discovered Ria Hall's debut EP back in 2011, it was Rakai Karaitiana’s eye-catching cover art that nabbed my attention — presenting a stylized Queen of Hearts, brandishing a mere in the top image, and swinging poi in its lower reflection.

Having savoured the visual pleasures of  the CD’s cover, it was Ria Hall’s voice that sealed the deal for me, right from this opening minute and a half of acappella waiata.

It’s a voice that’s almost ancestrally rich in timbre with a bold, forceful and generous vibrato that seems to bloom from the very lifeblood of a note.

Within a year Hall would be part of a mana-loaded waka for an album that paid tribute to the songs of the late Hirini Melbourne.

Fellow artists ranged from Tama Waipara and Teremoana Rapley to Kawiti Waetford, a young operatic tenor who, within months, would be charming me in a production of Così Fan Tutte.

Ria Hall chose Melbourne’s 'Tihore Mai' and, six years ago on this programme, I found her brooding, soul-laden approach to one of Hirini’s sunniest songs not so easy to relate to. Perhaps my expectations had been coloured by the song turning up, a decade earlier, as a sparkling opener for Moana and the Moahunters’ first album.

Now, I can more easily hear that this version has a voice all of its own.

Ria Hall’s debut album The Rules of Engagement is something to celebrate. Throughout, one can sense that the striving that was there in her EP has borne fruit.

This is a project with strong roots for the singer. Based herself in Tauranga, she uses the historic battle of Gate Pa in 1864 to reflect upon issues of war and conflict that go beyond that colonial disaster. The album’s liner notes talk of the need, these days, to stand up against the establishment and its hypocrisy ... for love of righteousness; for the retention of culture and language. But none of this is as physically brutal as that battle in 1864 that inspired this album.

It’s all caught with a documentarist’s flair. Before you listen to any music, read the “Rules of Engagement” on the back of the CD booklet, a battle proposal sent by Henare Taratoa to Sir George Grey before the battle took place.

And during the musical proceedings, Hall brings in some historical commentary from her great uncle, Turirangi Te Kani, recorded in 1968, leading in to a marching song of bristling intent.

Much of the material on Rules of Engagement is co-written with a veritable whānau of collaborators, including the band Electric Wire Hustle, poet Te Kahupakea Rolleston, and colleagues from Laughton Kora to Che Fu and Tiki Taane, who handles much of the production.

Che Fu shares the microphone with Hall in 'Tell Me', outlining cycles of eternal struggle from a woman’s point of view and then a man’s.

Tough and righteous messaging, wrapped in the deceptive honey of soulful reggae.

In a 'Mixtape' for RNZ National's Music 101, Ria Hall expressed an admiration for American soul singer Bill Withers, as she spoke of a story being so beautifully unwound in his song 'Grandma’s Hands'. This song is covered by American singer José James on his recent album, Lean On Me. William ends his programme with this.

Listen to all these songs and several others featuring Ria Hall by clicking the "Listen" button above.