William Dart reviews the new album by the artist known as Christine and the Queens simply titled Chris, and takes a little look at some classic standards performed in a gender-switched way. 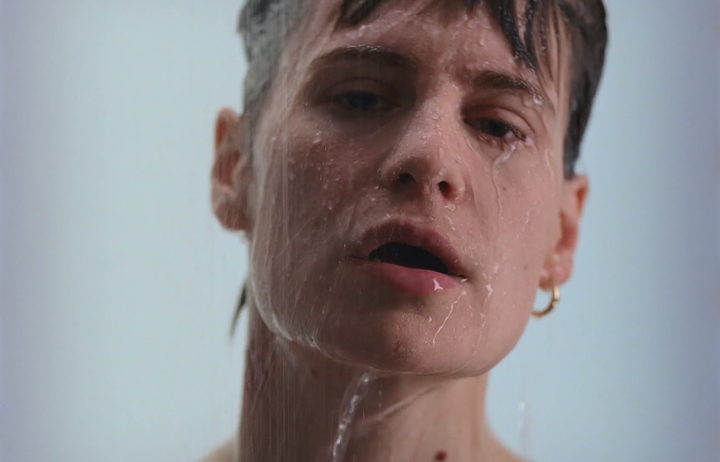 Christine and the Queens, still from "5 Dollars" video Photo: Because Records

French musician Héloïse Letissier works under the name Christine and the Queens.

When her first album appeared in France, titled Chaleur Humaine, or 'Human Warmth', its third track, “Christine” was not a happy ballad, looking at the life of a woman — or quite possibly a drag queen — floating untethered through life. She reads books from their last page backwards and is obsessed with make-up under looming and slightly menacing skies. And, being French, she has the air of a new existential hero.

When Chaleur Humaine received its international release in 2016, some of its French lyrics were replaced by English and the song "Christine" became "Tilted". This, the album’s third single, is a jittery nervy affair, with some of the singer’s original lyrics coming through in her elegantly handled rap. The video has Letissier and three dancers, choreographed by Marion Motin, twisting and contorting with gravity-defying plasticity, thanks in part to a roving camera. The singer herself has drawn parallels to the dancing of Fred Astaire, in which the division between dancing and flying can sometimes become deliciously blurred.

Yet behind it all is music that could easily have been disastrously earthbound with just two harmonies moving back and forth, over and over again.  But, once you can trust yourself to enter their space, as it were, the chords act like the plushest of synthesized lungs. Not only do they breathe with the song, but they provide the breath that keeps it aloft.

This first Christine and the Queens album was a runaway success. The Observer liked its stylish, empathetic songs that were bilingual, sexually fluid, and influenced by the new musical trinity of R&B, hip-hop and glitch digitals. NME hailed it as cool pansexual pop with a heart as big as its hooks.

Héloïse Letissier’s gender politics are unflinchingly assertive, drawn with Gallic finesse in the duet that was the album’s second single. In the song "Jonathan", she calls on American singer, Mike Hadreas as a singing partner, a man better known through his stage name of Perfume Genius.

He introduces the theme of the song, journeying through fear to courage and finally assertion, opening with the simple yet effective image of a hand being laid on a forehead.

Letissier adds the woman’s point of view, ratifying its philosophy and politics, beautifully played out over just a few more harmonies than you heard in the last song. But can we hear the same rotating chord sequences that are so much a part of Baroque music. And perhaps the electronic flickering is the contemporary equivalent of 18th century ornamentation.

Héloise Letissier warned us in advance of her second album that there would be tougher politics coming and they’re there to see on its very cover. Fitting in well with the gender-ambiguous title of Chris, we see Letissier with newly cropped hair, lean and butch.

She is very much into subverting any pre-conceived notions of what it is to be a woman in 2018. She’s determined to escape boxes, as she puts it, which has her favouring the stage over the recording studio, liberating her options to choose, explore and extend what she does.

It’s a quest for freedom that’s caught in the song "Doesn’t Matter", with cleverly cadencing voices and a smooth weave between singer and the surrounding beats and electronica. But there’s also something else: Letissier’s charming and offbeat way with the English language that invests her very serious politicking with just the right lift and lilt.

This is the woman who promised that any dancing to this new album would have to be funkier and sweatier.

And there is dancing in the video for "Girlfriend", set in what looks like a skyscraper under construction: a synchronized group cluster revealing her deep devotion to the late Michael Jackson.

The video for the song "5 Dollars" is a much cooler affair, adding a special charge to the track’s straight-up pop appeal. Simply listening to the song brings up images of money being exchanged, possibly for sexual services. Listening to and watching it, as Letissier does a gym workout, showers and chooses her night-wear from an impressive wardrobe of leather and fetish wear, takes it somewhere else altogether.

The sleek, sexual fluidity of this music is very much 2018.

Earlier this year, a curious EP titled Universal Love: Wedding Songs Reimagined turned up. The six artists involved include St Vincent storming through The Crystals’ “And Then I Kissed Her” to Kele of Bloc Party turning The Temptations’ "My Girl" into "My Guy".

The least expected contributor must the grizzled genius who held Auckland’s Spark Arena in thrall a month ago. Bob Dylan sang his own songs on that occasion, putting his Frank Sinatra Songbook firmly to the side.

But, for a good cause, he’s always happy to take a cruise along Tin Pan Alley, here with the song "He's Funny That Way", indelibly associated with Billie Holiday. And somehow I think that Holiday, who loved and was loved by both men and women, would have been chuffed.

Listen to Bob Dylan's gender-fluid performance and others by clicking the 'Listen' link above.

'Christine' (Sioux, Severini) – Siouxsie and the Banshees
Once Upon a Time: The Singles
(Polydor)

'5 Dollars' (Letissier et al) – Christine and the Queens
Chris
(Because)

'There ain’t no Sweet man that’s Worth the Salt of my Tears' (Fisher) – The Rhythm Boys (Bing Crosby, Al Rinker & Harry Barris)
The Man I Love
(Conifer)