English musician Ray Davies (from The Kinks originally) has had a lifelong fascination with the USA, and he's released two albums under the title Americana, based on his experiences of touring and living there. William Dart investigates. 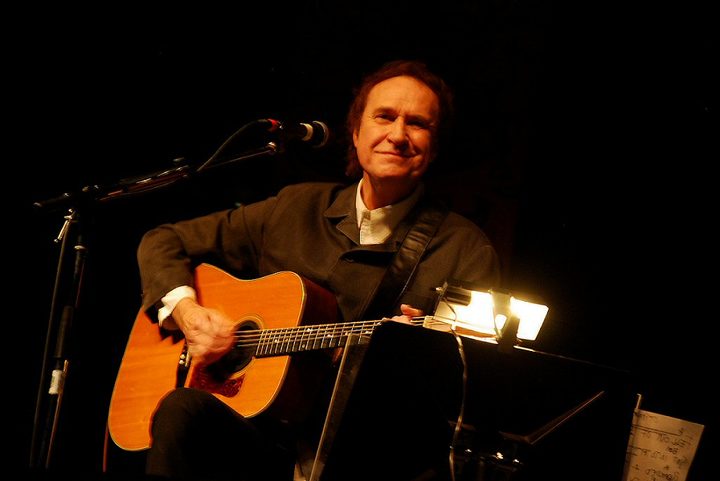 This month sees the release of the second instalment of Ray Davies’ Americana project, titled Our Country: Americana Act II.

The same Ray Davies of The Kinks who, back in the 1960s, was the quintessential chronicler of the Brit way of life, capturing foibles, follies and fashions in three-minute-long vignettes.

The Kinks’ 1972 album Everybody’s in Show-Biz was inspired by the life of a touring rock band, a great road trip that took them as far as America, for a stroll along one of LA’s most celebrated streets. Which meant meeting a new character with every star that they stepped over.

When Ray Davies wrote his first autobiography in 1994, with the title  X-Ray, he opened by describing himself as far from star material. He was the product of a century which started at the height of class-conscious imperialism and ended with a society reduced to totalitarian commonness.

And almost twenty years later, he wrote about himself again, in his 2013 book Americana, subtitled “The Kinks, The Road and the Perfect Riff”. Here, in a special Preface, he sets off by testifying to the inspirational power of America’s music for a north Londoner, growing up in the austerity of post-war Britain. Music that had given him both hope and a feeling that he could express himself in song through a new art form called rock and roll.

But the reality of touring the States and indeed living there for some years soon made itself felt. As he himself puts it, the flickering light of fantasy turned into the cold light of day. But in the beginning, opening his first Americana album last year, with the smooth luxury of the Jayhawks behind him, there was hope.

Ray Davies penned some terrific songs on this album — which was his first outing with original material for almost a decade. And how well he catches bittersweet disillusionment, early on, in the song "Message from the Road".

That eerie high note, poised above it all, like the most delicate of Damocles swords, never goes away. Even when keyboardist Karen Grotberg takes over to give another point of view. But what a song it is, a slightly fey hacienda shuffle with honeyed harmonies and sentimental cadencings. You could imagine Ry Cooder and Flaco Jiminez giving it a very uptempo Tex Mex workout.

Americana the book allows us to experience life on the road with Ray Davies and the Kinks – day by day and gig by gig when it comes to a 1977 tour, a mammoth slog that took them from Philadelphia to Pomona, New Jersey with everything in between from San Francisco and Kansas City to Vancouver. Reading these pages, you certainly feel the exhaustion of it all as Davies copes with sub-par bass players, falling asleep during a screening of Rocky with Brian Wilson at his side, and buying a box set of Wagner’s Ring cycle from Peaches record store in Detroit and remarking. “What a heavy box that was”.

You’re very aware of these written words in both of Ray Davies’s Americana albums. They crop up in spoken introductions by the singer, sketching a little background to a forthcoming song, although they can’t hope to compete with the compulsive flow of his written prose.

One whole chapter of the book of is devoted to The Big Guys, the group’s minders over a six year period from 1977 to 1983. Two of these men are selected for one of the songs on Davies’ second Americana set. Tony, a Londoner who’d been told to threaten Davies with a broken arm if he went beyond his drink limit; a man who insisted on greeting colleagues as mush, cock and mate, when around him the colloquial terms of address were man, buddy and brother.

The second big guy, Bobby, took over when Tony left. He was a bloke with with a bottle of diet soda forever in his hand, constantly trying to rope Davies into playing pool.  He was a hulky American with a lisp, who fitted in with the musicians’ British sense of humour. There’s a moment of dark regrets on the recording when Davies comments that, had either man been there on that fateful night in New Orleans in 2004, he mightn’t have suffered the gunshot wound that he did.

But it’s the book that tells us that both men died of cancer, Bobby passing away on the wrong side of 30. A detail that makes this song almost achingly poignant.

While I’m not sure that the 19 tracks of Americana Act II really justify a second album, there are some songs which dovetail neatly into some of the best reads in the memoir.

In a chapter headed "Misfits" — the title of a 1978 Kinks album, one of their toughest —  Davies discusses, in some depth, the business of being a songwriter. He starts by invoking the name and wisdom of veteran Sammy Cahn and the importance of weighing every syllable and stress.

Davies recently spoke about the special musical appeal of New Orleans. He likes the separateness of New Orleans, even if he playfully describes The Big Easy as The Big Weird on one of the new album’s tracks. New Orleans is not really part of America, he says. It’s a bit French, a bit Afro-Cuban. And you can hear that on one of the strongest of his new songs, "A Street called Hope".  It’s not difficult to imagine what a wild party Dr John might make of this at his Steinway. But when Davies does it, it’s an airy, almost Gallic, piece of whimsy. Why, he could almost be auditioning successfully for Django Reinhardt’s hot club fivesome.

Hear these and a few more Ray Davies songs by clicking "Listen" above. William finishes the programme with a couple of songs from the Guatemalan musician, Gaby Moreno. They give another viewpoint on the immigration to America thing and the second is a "wash of sheer exhilaration" courtesy of a classic Van Dyke Parks arrangement.

'Waterloo Sunset' (Davies) – The Kinks
Something Else By the Kinks, Deluxe Edition
(Sanctuary)

'The Ride of the Valkyries, from Die Walküre' (Wagner) – Berlin Philharmonic Orch / Lorin Maazel
The “Ring” Without Words
(Telarc)