William Dart takes a listen to two new albums – Revamp and Restoration – which "re-imagine" the songs of Elton John and Bernie Taupin. 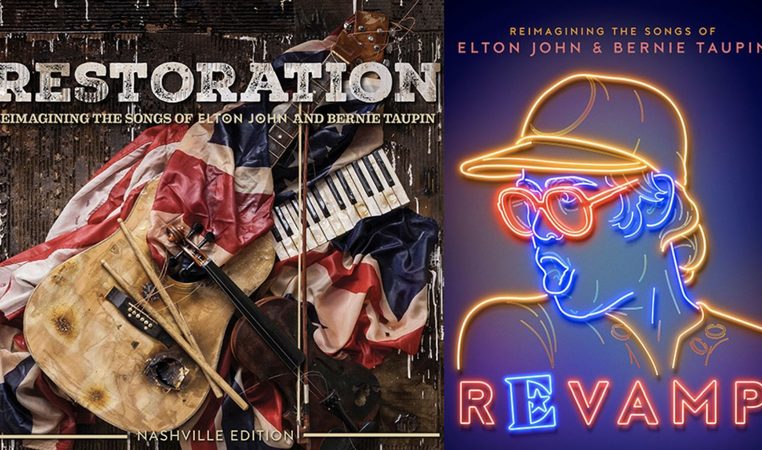 In 1969, Elton John was a busy young singer and pianist about town, covering, with scrupulous fidelity, the hot numbers of the day on various Chartbusters albums. Thanks to him, folks could pick up el cheapo versions of songs by the likes of Mungo Jerry, Stevie Wonder, Creedence Clearwater Revival.

Here he is with the classic Blue Mink number.

Elton John’s music arrived in this country in 1970 when his second album was released, the one with just his name on the sleeve front. One track, titled Your Song, really stood out. Bernie Taupin’s nicely observed lyrics were just one of its virtues. The other was its musical setting that ran from casually conversational to hold-nothing-back lyricism, complete with period Paul Buckmaster strings.

It’s a song that has served its singer well. He’s duetted in it with colleagues from Patti Labelle to Ronan Keating. It turned up in a high-powered performance at a live concert tribute to Princess Diana. But nothing could ever eclipse the original.

Back in 1991 Mercury Records got together the very first tribute to Elton John and Bernie Taupin songs with the album Two Rooms. It was long enough ago to have The Who singing Saturday Night’s Alright for Fighting and The Beach Boys putting a bit of sand into Crocodile Rock. So much of it was just too synthy for my taste at the time, but it certainly set off well with Eric Clapton’s 'Border Song'. How could it miss with the late Michael Brecker leading the reed section and the gale storm chorus blast of Reverend Timothy Wright and the Washington Temple Concert Choir.

Now, the extreme patience of Elton John fans has been rewarded with not one but two new tribute albums, titled Revamp and Restoration. The one the brainchild of the man himself, the other coming from Bernie Taupin.

Revamp — the rock version for want of a better description — is a disappointment. Or am the only one immune to the wan fluffiness of Ed Sheeran singing 'Candle in the Wind'.

Let’s seek sanctuary in Mary J Blige giving us 'Sorry Seems to be the Hardest Word'. Back on the 1991 tribute, Joe Cocker made this into a heart-render, with an arrangement that stressed the song’s signature bass line and harmonies. Blige boldly rips the song apart, providing her own backing and echoing vocals, while producer DJ Camper works alchemical miracles around her. It’s some trip.

The second Elton John tribute titled Restoration makes a better job of living up to its name. Bernie Taupin’s lyrics have often looked west for their inspiration and now an impressive roster of performers add the requisite country trimmings.

While the Revamp album wastes pages of its booklet with neon doodles, compressing credits into two pages of small, small type, Restoration is much kinder on information seekers. You’ll find all the lyrics as well as personnel credits.

So, if you’re wondering about the eerie sounds in Little Big Town’s version of the song 'Rocket Man', they come from NASA’s 2011 Juno mission to Jupiter. A spacey backdrop for what sounds like the best Brian Wilson song that the Beach Boys never sang.

We meet favourite old-timers on Restoration. Willie Nelson, sounding all of his 88 years, takes us into tombstone territory with 'Border Song'.

I could have done without Miley Cyrus, I must admit, who’s on both the tribute albums. Her version of the Stones-style rocker, 'The Bitch is Back', pales alongside Tina Turner’s 1991 take on Two Rooms.

I did appreciate though meeting up with John and Taupin’s rather overlooked ballad, 'Please', a reflective turn from Elton John’s 1995 Made in England album. It’s lovingly put across by Rhonda Vincent and Dolly Parton, with Hunter Berry’s deviously cranky fiddle deserving equal star billing.

Ironically, the most convincing coming together of Elton John and country music happened 18 years ago when veteran banjo player Earl Scruggs, of the Flatt and Scruggs partnership, gathered his friends around him to tint their songs with a touch of bluegrass. Elton’s John’s song 'Country Comfort', from his 1970 album Tumbleweed Connection, never seemed more connected.

Click on the 'Listen' link at the top of the page to hear the whole programme with all these songs and more.