An unusual theatre work for instruments, a narrator, two actors and a dancer. 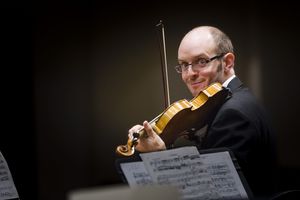 Stravinsky was living in Switzerland during the war and there he met the writer Charles Ferdinand Ramuz, who despite being Swiss originally, had returned there for refuge also, having been living in Paris.

Ramuz wrote the libretto for The Soldier’s Tale, an unusual theatre work for instruments, a narrator, two actors and a dancer. It relates the story – a parable really – of a soldier returning home from war who trades his fiddle with the Devil for unlimited wealth. What could possibly go wrong?

Originally scored for a septet, in this concert we hear the suite of pieces that Stravinsky prepared specially for the work’s clarinet-playing commissioner – for a trio of violin, clarinet and piano.