This is an Encore video presentation of the Auckland Philharmonia Orchestra performing 'Symphony No 5' by Dmitri Shostakovich. 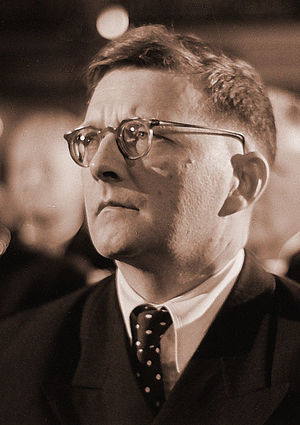 Stalin himself attended a performance of Shostakovich’s opera 'Lady Macbeth' in 1936, and it’s said that he detected in it considerable and thinly-veiled criticism of himself and his regime. Two days later, Pravda published an article that viciously criticised the composer.

Overnight, Shostakovich became effectively an ‘enemy of the people’.

Although his fourth symphony was already finished and ready to be premièred, he thought it prudent to withdraw it, and he started work on his Fifth. It was given the subtitle – not by him – “A Soviet Artist’s response to justified criticism”, and on the surface at least, it seems to revert to a simpler style, apparently calculated to be approved by the communists. To this day, people argue about whether this was a case of Shostakovich submissively prostrating himself before the regime – boot-licking, in fact – or whether the fifth symphony is a gigantic exercise in subversive, bitter irony. If it was indeed the latter, it seems that Stalin and his minions fell for it.

There are five movements, including an intensely funereal slow movement, and at the end, a triumphant Allegro that appears to be a huge hymn of praise and rejoicing.

But Shostakovich himself was reported to have said: “What exultation could there be? I think that it is clear to everyone…that the rejoicing is forced, created under a threat…You have to be a complete oaf not to hear that.”