Don Giovanni lives for one thing – women! He seduces compulsively and unrepentantly, while his long-suffering servant Leporello maintains the catalogue. 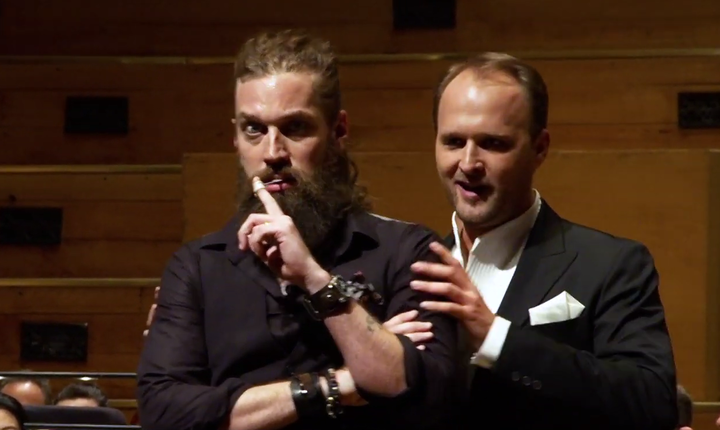 The second act begins with Giovanni swapping clothes with Leporello so the Don can seduce Elvira's maid.

Masetto enters in pursuit of Giovanni, mistakes him for Leporello and receives a beating for his troubles. Zerlina appears and soothes his pain.

Meanwhile, fooled by Leporello's disguise, the ever-forgiving Elvira is on hand to plead for Giovanni's life when Anna, Ottavio, Zerlina and Masetto threaten it.

The terrified Leporello reveals his identity and flees.

Servant and Master meet in the graveyard where the statue of the murdered Commendatore interrupts their chat with a threat of comeuppance. Leporello is terrified; Giovanni not so and he invites the statue to dinner.

In the dining room of Giovanni’s palace, Elvira makes a last ditch effort to persuade her former lover to repent. He mocks her.

As she leaves, the Stone Guest arrives. Don Giovanni grasps the statue’s hand, which is ice cold. Still, Giovanni refuses to repent. He descends into the flames of hell.

The other characters re-enter and sing the story’s moral - that such is the end which befalls evildoers.