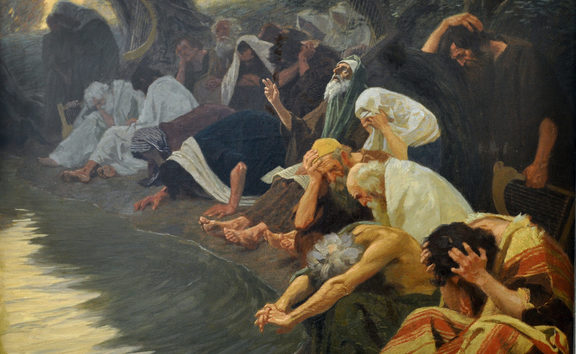 Gebhard Fugel: By the Waters of Babylon Photo: Public Domain via Wikimedia Commons

De Monte’s Super flumina Babylonis and Byrd’s Quomodo cantabimus are perhaps the most famous example of musical correspondence. Thirty years after visiting England in the retinue of King Philip II of Spain, Philippe de Monte (1521-1603) sent William Byrd a copy of his double-choir setting of Psalm 137. It’s unclear if De Monte made the acquaintance of the younger composer during his earlier visit but the piece can be read as a show of solidarity with a fellow Catholic, making the parallel between the Jewish exiles and the perilous situation Byrd and the other recusants faced. One year later, Byrd wrote back to de Monte with his reply: Quomodo cantabimus.

“Whereas Super flumina has an obvious air of melancholy, I get a feeling of Byrd’s quiet defiance from Quomodo. In addition to the heartfelt plea to not forget Jerusalem (or, in this case, Rome), Byrd also constructs it in such a way that the Bass 1 and Alto 1 parts are in canon, with the Alto 2 following in inversion.” - Michael Stewart