David Long of The Mutton Birds has composed ‘I’ll Hum the First Few Bars' for amplified guitar, orchestra, and something called 'mechatronics'. Director and composer David Downes created visuals for the performance, inspired by the score.

This is its premiere performance with David Long playing the guitar, Dr. Jim Murphy playing the mechatronics and Orchestra Wellington, conducted by Marc Taddei. 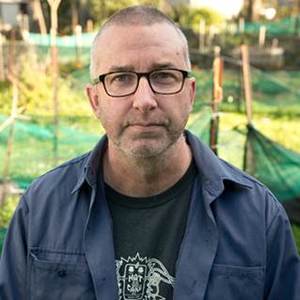 Dr. Jim Murphy's 'mechatronics' are essentially musical robots. They're machines that are pre-programmed to respond to certain events in the music. The visuals which go with the performance are tightly synched to the mechatronics' movements.

As well as performing on the guitar, David Long conditions the mechatronics by dropping a variety of objects onto their large glass plates, changing the texture of the sounds they make.

The mechatronics shift and tilt, somewhat like two-dimensional rain-sticks, and the resulting noises are electronically amplified.