BEETHOVEN: Symphony No 6 in F, Pastoral

Beethoven's Sixth Symphony is unlike any of his others. 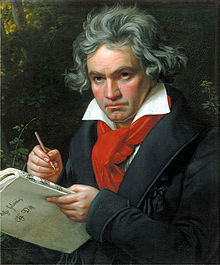 The composer wanted to make sure the Pastoral Symphony was not seen merely as mimicking sounds from nature, but as an exploration of the effect nature has on the human soul.  He even published a brief programme note - the only instance of one from him - for the work's première.

'Pastoral Symphony, more an expression of feeling than painting.  First piece: pleasant feelings which awaken on arrival in the country. Second piece: scene by the brook. Third piece: merry gathering of country people; interrupted by Fourth piece: thunder and storm, into which breaks the Fifth piece: salutary feelings combined with thanks to the Deity.'