L'Arpeggiata is an early music ensemble with a difference. Their aim is to revive almost unknown repertoire from the 17th Century and to present it with a spirit of improvisation that crosses over into jazz. Founded in 2000, the group is directed by theorbo player Christina Pluhar. They've played around the world and entranced audiences with their virtuosity and sense of fun. Highly entertaining.

This concert, Music for a While, is based mainly on the theatre music of Henry Purcell.

For RNZ Concert, the producer was Tim Dodd, the recording and mixing engineer Adrian Hollay. The presenter is Tim Dodd. 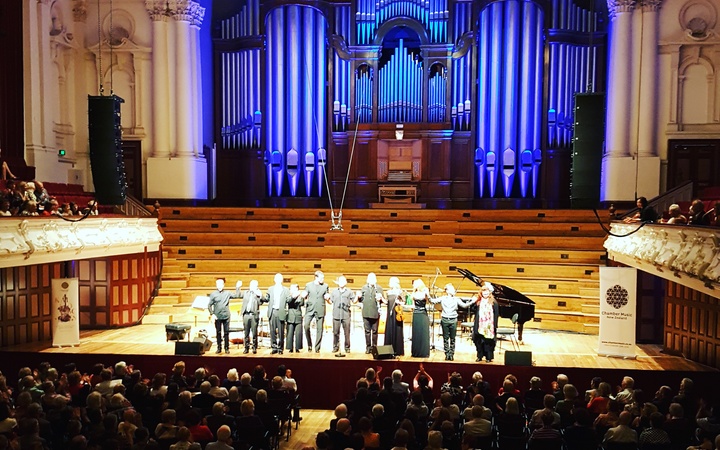 CAZZATI: Ciaccona
PURCELL: Music for a while, from Oedipus the King
PURCELL:  'Twas within a furlong of Edinborough Town, from The Mock Marriage
MATTEIS: La Dia Spagnola
PURCELL: A Prince of glorious race descended, From Orpheus Britannicus
PURCELL: One charming night, from The Fairy Queen
PURCELL: Ah ! Belinda, from Dido and Aeneas
PURCELL: An Evening Hymn on a ground, from Harmonia Sacra
PURCELL: Strike the viol, from Come Ye Sons of Art
PURCELL: When I am laid (Dido’s Lament), from Dido and Aeneas
PURCELL: Two upon a Ground, Chaccone, from Dioclesian
PURCELL: Here the Deities approve, from Wellcome to all pleasures
IMPROVISATION: Canario
PURCELL: Man is for woman made, from The Mock Marriage
PURCELL: Curtain Tune on a Ground, from Timon of Athens
PURCELL: O, let me forever weep, from The Fairy Queen
PURCELL: Hark ! how the songsters of the grove, from Timon of Athens
TRAD: Pizzica di San Vito