We’ve saved you a seat… among the orchestra!

Orchestra Wellington and RNZ Concert present a 360 degree video of the Finale of Beethoven’s 9th Symphony, from the player’s point of view.

Placed among the musicians, you can look around at them, the choir, conductor and audience as you listen to a beautiful performance of an epic and much loved piece of music.

How to enjoy this video: If you’re watching on mobile open the video in YouTube, select 'full screen' (tap the [ ] bottom right of the frame) then tilt or move your phone.
If viewing on desktop, use your mouse pointer to click and drag around the screen to explore, while enjoying RNZ Concert’s award winning sound.
Best viewed on mobile phone, best heard through external (bluetooth) speakers.

This progressive and innovative audience experience from  Orchestra Wellington - putting the audience in the middle of the orchestra - is a New Zealand first, and one of the first times world-wide that this virtual reality/360 degree tech has been used in this way.

Beethoven’s Ninth Symphony is without question one of the monuments of the Western canon and the history of music is impossible to consider without acknowledging its genius, sublimity and influence.

For his last symphony, Beethoven turned to words that inspired his youth - Friedrich Schiller’s 1786 “Ode to Joy”: simple words, with the rough energy of a drinking song proclaiming the joy of brotherhood, community, Love, Nature and God.

Fire drunken we are ent'ring

Schiller’s poem was set to music by many composers, quickly becoming popular fare for house music parties. Meanwhile Schiller’s reputation continued to grow through a series of plays about freedom, oppression and the tyranny of social convention, themes that paralleled Beethoven’s concerns.

However it was not until 1823 that Beethoven found the right theme to set Schiller’s lyrics. Then, as he began preliminary work on his Ninth Symphony, the familiar tune appeared in the bass clef, and under it Beethoven wrote “This is it! Ha, now it is found….Freude, Schöner…”

However, even this simple musical seed cannot be attained without travelling first through some of the most complex and monumental music Beethoven ever wrote, in the first three movements.

“…And the darkness was without form, and void…” The first movement anticipates the creation of the universe, in a tense expectancy generated by fast triplets in the second violins and cellos. Sudden downward-leaping notes sketching out the D-minor chord appear like flashes of light - the stars stutter to life and history begins. If Beethoven’s 5th Symphony was built on a mere four-note motif, this monumental work begins on almost nothing at all.

Characteristically, Beethoven builds on this bare D-minor scaffolding with utmost logic and wild imagination. Every motif leaps into being and becomes a solid block, enduring.… and then smashed again and rebuilt. Among the blocks are a motif that leaps down the minor triad and its reply, a theme that raps out the same rhythm as the start of Beethoven Five, but continues it. A contrasting motif is a rising and falling legato passage played by groups of woodwinds. From then on, it is all development - no corner or angle of melody is left unexplored, stretched, transmuted, recombined. The movement closes with a strange funeral march.

The Scherzo is a madcap chase launched by the timpani. It takes the downward leaping motif of the first movement and turns it into a relentless dotted rhythm that travels through a kaleidoscope of different keys. In contrast, the trio that nestles in the middle is unfazed by the drama and bustles along cheerfully with pastoral charm.

The Finale begins with a storm, spitting out fragments of the preceding movements. Each time the basses interrupt with declamatory statements. Eventually they are offered a fragment of the Joy theme.  Now their response is positive as they take up the theme. It is small, it is humble, yet it is the answer to everything that has come before. It grows and swells. Then the terrifying storm music returns to throw it aside.  Suddenly the vocal bass, who has been sitting as silently as the other singers in front of the orchestra, stands up and arrests everything to proclaim, “Not these sounds, friends! Let us rather strike up something more joyful!”

And then we have arrived, with the chorus proclaiming “Joy” and the whole ensemble carrying Schiller’s words through unimaginable terrain. There is sweeping joy, and there are also halting, sarcastic marches; complex fugues, great church-shattering chants and moments where the words become sublime exhalations. “Be embraced, you millions! Receive the world’s kiss.” Then at last the choir and orchestra’s wild race to the end, exalting Joy again. 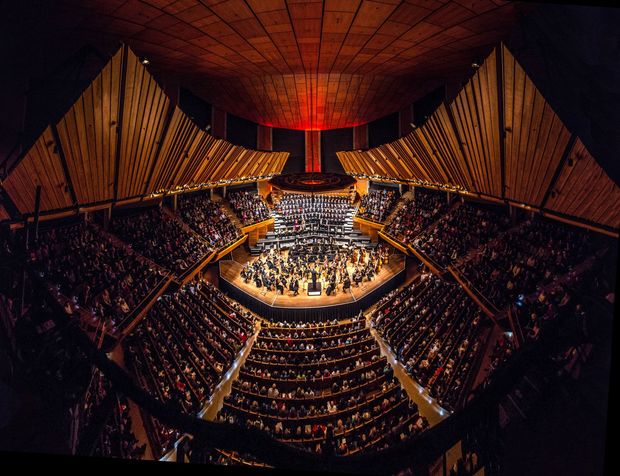