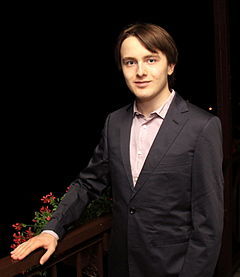 The first Gilmore International Keyboard Festival took place in 1991. The Festival spanned nine days and encompassed 46 musical events, including a Music Critics Institute. Now, every two years, The Gilmore presents two plus weeks of superb piano performances – nearly 100 events. The Festival has become a leading American festival known the world over for celebrating the joy and power of keyboard music in concerts, lectures, master classes and films.

In tonight’s programme we have Russian virtuoso Daniil Trifonov who has won numerous prizes in prestigious piano competitions around the world including XIV International Tchaikovsky Piano Competition in Moscow. He will be performing Schumann’s Symphonic Etudes, Op.13

“Trifonov had everything and more, what he does with his hands is technically incredible. It’s also his touch – he has tenderness and also the demonic element. I never heard anything like that.” Pianist Martha Argerich.

Supplied by the WFMT Radio Network