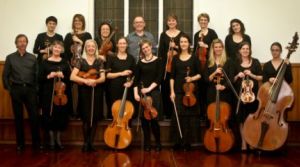 In 2014 the early music group NZ Barok celebrated ten years of playing together. To mark this achievement they presented this anniversary celebration concert. It was an opportunity for the group to invite back some of their extended NZ Barok family: Jayne Tankersley, one of NZ Barok (formerly AK Barok) and soloists who have performed with the group over those first ten years.

Jayne Tankersley, one of their regular soprano soloists will begin the programme with 5 movements from Messiah by Handel. Followed by Jessica Shaw, who joins the band to play Telemann’s Recorder Concerto in C. Then we have Flute Concerto in D by Quantz, played by Sally Tibbles and NZ Barok.

To finish the concert NZ Barok will be performing a selection of movements from Handel’s “celebrated” Water Music - Ouverture, Adagio, Allegro, Air, Bouree and Hornpipe- 6 movements from Suite No.1 in F. This concert was recorded in November 2014.