Nick Tipping: Behind the Microphone 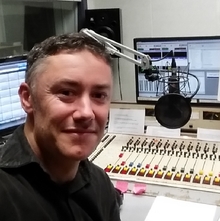 Nick Tipping is the most recent addition to our talented roster of casual presenters. He is known to many as a jazz bassist and educator.

To radio audiences, he is the host of an RNZ Concert series about the bass called The Low Down, he has reviewed new releases, and appears regularly on Upbeat.

We thought you might like to find out more about Nick's background, and what he enjoys about presenting on RNZ Concert.

We gave him some sentences to elaborate on for us - and we're sure you'll learn something about the man behind the microphone that you didn't already know:

By day he works for the New Zealand Symphony Orchestra, and by night he's a jazz musician!

As well as starting with RNZ Concert, I've recently started working with the fabulous NZSO as their Fundraising Executive, which is such a pleasure. I've been going to NZSO shows since I was about three, and I've been lucky enough to play with them on a few occasions. They're such a great team at head office, and it's a privilege to be able to support such a great bunch of players.

And yep - in the evening (when I'm not chatting away on RNZ Concert of course) I get to play jazz bass in and around Wellington! 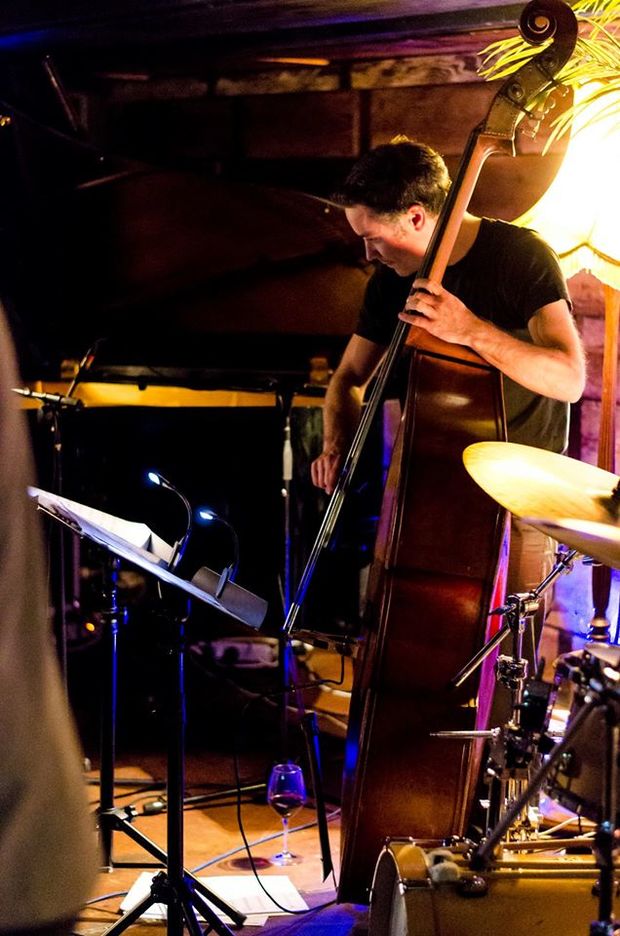 Nick Tipping in his element - behind the bass at a jazz gig. Photo: Ben McNicoll

He comes from a very musical family.

My Mum and Dad are both music teachers, most notably at Wellington Polytech, which became Massey University.

My Dad also used to conduct the Phoenix Choir in Wellington, and Mum taught music and was the coordinator for the Wellington regionals of The Big Sing (the national secondary schools' choral competition), for a long time. In fact they got to know each other as members of the National Youth Orchestra - Mum played oboe and Dad played double bass.

Also, my grandfather Peter Godfrey conducted the National Youth Choir and was director of music at both Auckland and Wellington cathedrals.

I'm very lucky that music has always been a big part of my life. All this heritage means that I'm still known to a lot of people as Simon and Rachel's son, or Peter Godfrey's grandson, and I'm very proud of those associations! 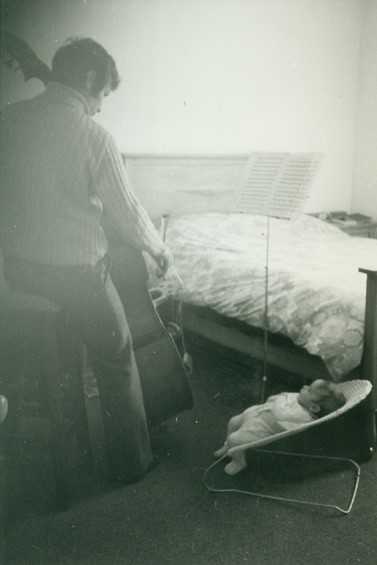 He still plays on his dad's bass.

The bass I play on gigs was Dad's when he played, and it spent years hanging out in the corner of the study when I was growing up.

I think the first thing I ever really played on it was playing along to Ravel's Bolero, which was being broadcast by RNZ Concert - luckily it only has three notes for most of the piece.

It was the first double bass I played at jazz school, and since then I've taken it to the USA, and all over New Zealand. It has tequila stains from a dodgy band I played in in the late 90s, and even a couple of bloodstains where I've paid the price for not playing for a while, and letting my hands go soft. But I think I've played well over a thousand gigs, and recorded at least twenty albums on that bass.

Now when I'm not playing it, it keeps us company in the corner of the lounge. It's more a member of the family than just an instrument! 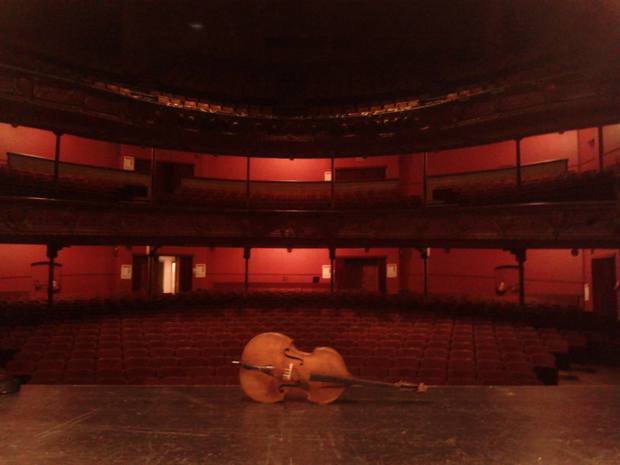 The Tipping family bass, taking a moment to reflect in its glory. Photo: RNZ/Nick Tipping

He could teach you a thing or two about jazz.

I've spent a lot of my life involved with jazz education in one way or another. I was Head of Jazz at the NZ School of Music for five years, which was a real thrill. I studied jazz bass at Massey, and did my Masters in jazz at the University of Nevada, Las Vegas.

And I've just graduated with my PhD in jazz from Victoria University, where I studied the Wellington jazz scene - the country's finest!

It's awesome to be back working with classical music at RNZ and the NZSO though - I started out as a classical musician so it's like returning to my roots.

See Nick performing in his group The Jac; from a live show following the recording of their second album at Christchurch's Orange Studios in 2015, The Green Hour:

Traveling with a bass is a risky business.

This one time, I was flying through San Francisco International Airport, and I had with me a little travel bass, which was pretty much the fingerboard part with strings on it. When I had bought it, it hadn't come with a case, so the best thing I could find was an old rifle case.

I didn't really think very carefully, so when I was walking through the airport, relatively soon after 9/11, all of a sudden I was confronted with three very large, very disapproving looking security guards. They asked me to put the rifle case down on the ground, and take ten steps back. When they carefully took a look at what I had been carrying they were relieved, although understandably puzzled. I had to play it for them then and there in the terminal to show them what it was.

He goes by several other nicknames.

When I was on the faculty of the jazz school, the students called me "Captain Jazz", which isn't a bad nickname. In one band I was "Nick the Sweets" because I kept helping myself to free lollipops from the jar on the bar. At the NZSO I'm known as Neil, due to an unfortunate misprint when my name tag was made. 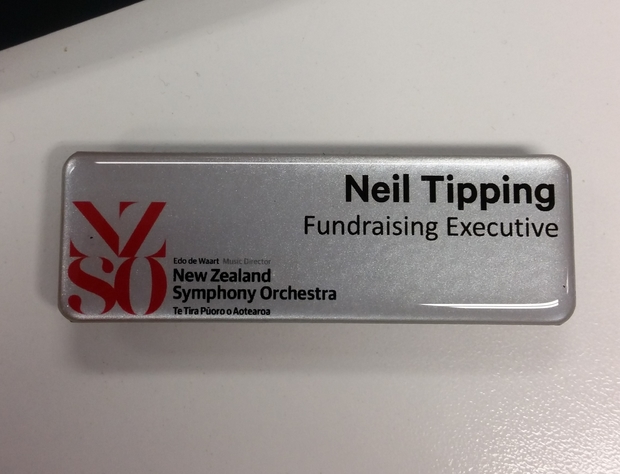 Nick's name badge at the NZSO didn't quite go to plan, leading to a nickname that stuck. Photo: RNZ/Nick Tipping

All of the members of one band I play in call me "Dad", as I'm between eight and fifteen years older than everyone else in the group. There are probably a few names out there that I don't know about as well...

The 'Dad" nickname is quite appropriate.

That's right! I have one beautiful thirteen-year-old daughter, and another on the way! She's due to join us in August, which is really exciting.

The radio studio is his happy place. 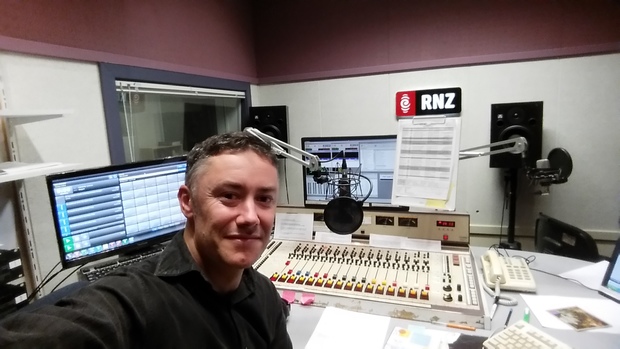 Nick Tipping takes a selfie during one of his first solo shifts presenting on RNZ Concert. Photo: RNZ/Nick Tipping

I love presenting on RNZ. I was nervous at first, but since I got the hang of it (did you know there are 4 CD players and three computers, as well as a huge mixing desk?!) I've been having a great time. It suits me down to the ground, because I love talking to people about music, and finding the stories behind different pieces. And I get to listen to a lot of fantastic recordings.

Also, I get to read the weather, which is amazing! For some reason it feels like the realisation of a dream - although I can't say I've ever dreamt of reading the weather! Maybe because it's one of those iconic NZ things - I mean, who hasn't heard the phrase "and now the short forecast for all of New Zealand, till midnight tomorrow" and now I get to say it myself!