RNZ Concert presenter Clarissa Dunn has been making her way around Europe, taking advantage of an impressive number of musical offerings on her travels. She has been keeping us up-to-date with an enviable selection of photos - here she tells us about some of her highlights in Germany.

In Munich I was kept busy studying the German language and culture at the Goethe Institut. When I wasn't in class (or listening to the Bavarian Radio classical station BR Klassik), I was busy exploring all the cultural riches and activities that Bavaria has to offer.

During my first weekend in Munich I got to see Barbara Hannigan conduct the Munich Philharmonic at the Gasteig, a superb concert hall beside the Isar River. 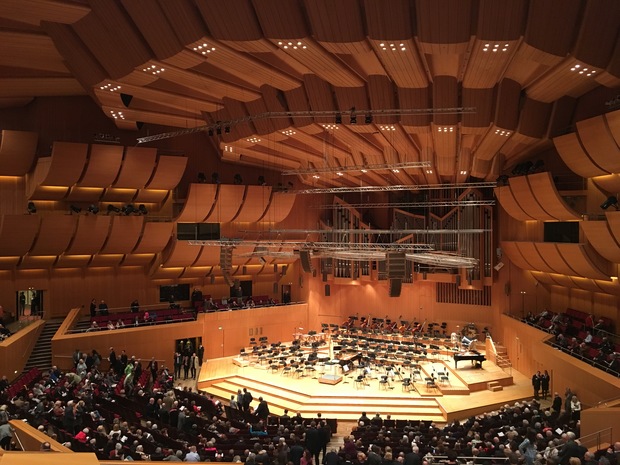 Inside the Gasteig concert hall, for a performance by the Munich Philharmonic and soprano Barbara Hannigan. Photo: RNZ/Clarissa Dunn

I love Barbara's work, not only as a conductor but also as a singer and sometimes as both at once. The programme began with Ligeti's Atmosphères, a work that I'd heard live with the APO on RNZ Concert just the week before. Parts of Atmosphères were played so softly and expertly that you couldn't tell where the sound ended and silence began. It was sometimes played so softy that the older lady sitting beside me thought her hearing had gone.

Barbara treated Atmosphères as a prelude to Alban Berg’s Lulu Suite; and to make the connection she conducted through a pause between the two works, which I found compelling. She sang Lulu's aria from the podium, turning her back on the orchestra and conducting more to the side of her body. At this point I wasn't sure what to focus on, her arms and her conducting, or her singing. I have to admit that it distracted me from her singing. 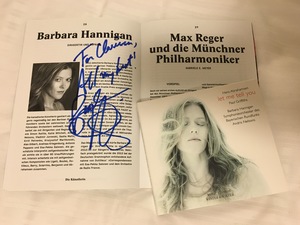 The second vocal number was in a higher range, and this time she faced the orchestra. I found this easier to appreciate. In this way she became one of the instruments. I felt like she was singing along silently the whole time. She took audible breaths to signal entries, and at the end she held the silence, almost literally.

I met Barbara after the concert at her CD signing. She took time to chat to each of her fans - some wanted selfies with her, and others wanted to discuss her musical choices. I tried my best to convince her to come and perform in NZ - so it seems has her mother, who would like to move to NZ!

Munich - The Long Night of Music 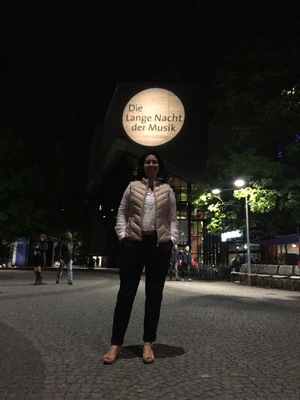 Once a year Die Lange Nacht der Musik (The Long Night of Music) takes place in Munich. Hundreds of live concerts are on offer at over 100 venues throughout the entire city; starting at 8pm and lasting until 3am.

As you can imagine, for someone who doesn't know the city well (or it's musical inhabitants at all well) this becomes a stressful opportunity and a logistical nightmare. Where do you start? Where do you finish?  What do you prioritise?

My strategy was to head back to the Gasteig, where I watched Barbara Hannigan and the Munich Philharmonic the night before.

There I managed to see Blechbixn (an all female brass band from Bavaria with a Balkan twist), Schlagzeug Percussion, and Anton Berlev playing jazz standards on a RED STEINWAY!

The Taschenphilharmonie/ Pocket Philharmonic were fun to watch - fantastic playing of symphonic music, led by the deliciously nerdy and funny Peter Stangel.

Bamberg – A Meeting of Kiwis 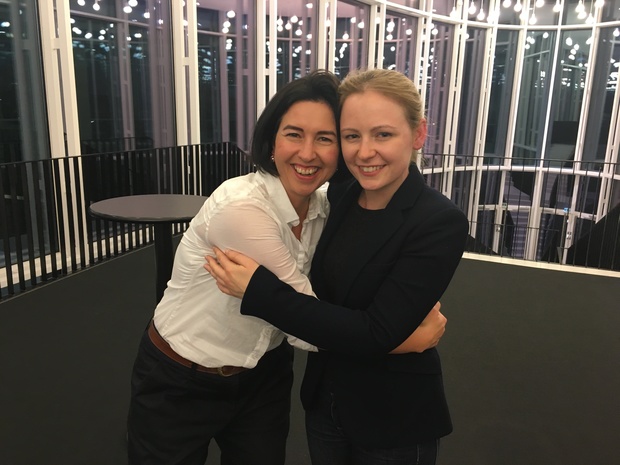 Clarissa Dunn and Gemma New, at the Mahler Competition in Bamberg, May 2016. Photo: RNZ/Clarissa Dunn 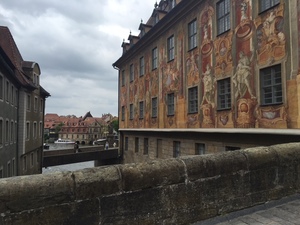 The view from a bridge in Bamberg. Photo: RNZ/Clarissa Dunn

I'd noticed from the RNZ Concert Facebook page that NZ Conductor Gemma New was competing in The Mahler Competition, one of the best conducting competitions in the world. So I booked a train ticket to the 1000-year-old city of Bamberg, a UNESCO World Heritage Centre in the North of Bavaria, armed with with my mobile phone and microphones.

Unfortunately Gemma wasn't selected for the finals, but I did have a chance to interview her and made a series of short videos (one embedded below). I was also excited to have 5 minutes with two members of the jury: Sir Neville Marriner (chief conductor of the Academy of St. Martin in the Fields) and Deborah Borda, the President and Chief Executive Officer of the Los Angeles Philharmonic. 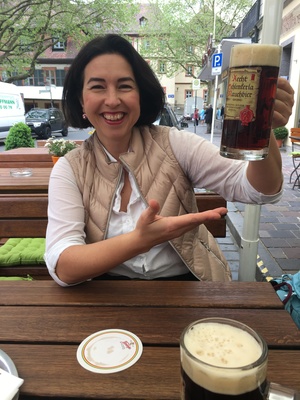 I watched the finals, where the three remaining contestants all played through the same excerpts including extracts from Mahler's Third Symphony and an extract from Dutilleux's Correspondances sung by guest artist Barbara Hannigan; who was also a juror.

I can really recommend listening to a competition like this, if only to see how different a piece of music can sound interpreted by different conductors.

After the final Gemma and I also had a chance to sample the local Rauchbier - smoked beer.

I also caught up with former RNZ Concert staff member Kyle Macdonald, who now works for Classic FM in London.

It was only then that I became aware that the very groovy and stylish older woman that I had complimented after the competition, was in fact Marina Mahler - Gustav Mahler's granddaughter, and the patron of this competition.

Read more about the Mahler Competition. 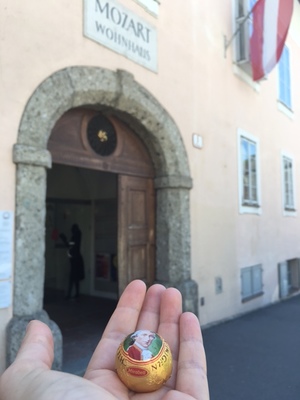 I managed to sneak in a trip to Salzburg between German classes.

I took the time to check out Mozart's house, which is now a museum showing all things relating to the Mozart family. Read more about it here.

One of the most interesting (and rather silly) things I learned while at the Mozart residence is that the great composer may have had rather extraordinary ears.

In a watercolour drawing in the museum at the house he lived in, you can see a drawing of Franz Xaver Mozart's ear. Franz was Mozart's son, and apparently he inherited his ear-shape from his father.

This sketch sought to compare the Mozart family ears to an ordinary set. The musical ears did have a Dumbo-the-Elephant-sized sound-catchment area, and what looked to be an earring...

I also ate too many Mozartkugeln! Marzipan, nougat, dark chocolate, Mozart – what’s not to like?! 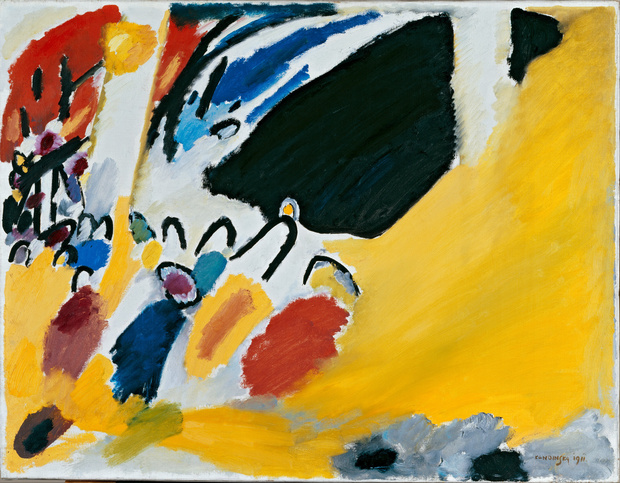 One of my favourite galleries in Munich has to be the Lenbachhaus. The gallery contains a variety of works by Munich painters and contemporary artists, in styles such as The Blue Rider. It was especially wonderful to take in so many of Kandinsky's paintings, which I knew very little about.

One that caught my eye is his Impression III (1911), which depicts the impression he got from a Schoenberg piano concert he attended. Apparently he loved it, but there were many people who thought the opposite. You can just make out the black grand piano, the audience and pianist. The swathes of yellow represent the sound. Yellow was the colour the synesthete painter used to represent music.

Munich - A Night at the National Theatre 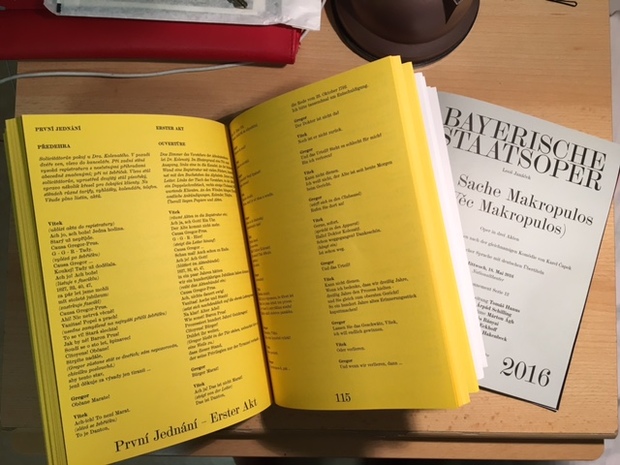 If you like tightly wound idea-bound and obsessive drama then Janacek's The Makropoulos Affair is for you. I saw an Árpád Schilling production at the Bavarian State Opera and thought it was good. I'd like to hear it again to pick up more of what is happening in the score, because musical ideas pass through like trains at rush hour.

The singing was strong across the cast including the men's chorus, although the chorus moved like someone poured a sack of potatoes on the stage. Munich audiences appear to be generous with their applause. After hearty applause lasting a good 5+ minutes, it only took one marathon clapper to start the whole process again.

It will probably be a life's work in translation, but I appreciated the opera programme - as thick as a novel, complete with essays, a libretto and translation, photos from the production, poetry by Sylvia Plath and more (pictured above). All for the same price as ours. It was a treat to hear the Bavarian State Orchestra conducted by Czech conductor, Tomáš Hanus. 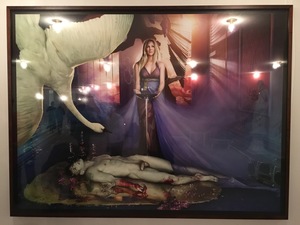 The National Theatre has portraits of past and present stars of the company adorning the walls. When you become a famous German soprano (Diana Damrau), apparently you too can have a beautiful portrait painted complete with a naked man. Albeit one you might have murdered with your coloratura...

I am in Vienna now, staying with a friend who basically lives across the road from the Musikverein!

Off to see the place where Beethoven's Symphony No 3 was premiered - my musical exploration of Europe continues...