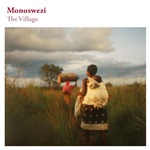 ‘Their sound is as intriguing as their makeup’, wrote one reviewer of African/Scandinavian band Monoswezi. The group was formed by Norwegian saxophonist Hallvard Godal after he spent a year in Mozambique in 2008. Godal and fellow Scandinavian musicians Putte Johander (bass) and Erik Nylander (percussion) are joined by Zimbabwean mbira player Hope Masike and percussionist Calu Tsemane from Mozambique. Their album The Village (Riverboat TUGCD1063) is a collection of traditional songs, mostly from Zimbabwe, which are blended with Scandinavian jazz