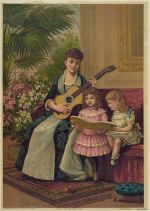 Carols are an ancient tradition and many of them deal with the serious matters of the Christmas story but with a delightfully light touch.

One of the treasure chests of the carol repertoire in English is the Oxford Book of Carols, collected by Percy Dearmer, Ralph Vaughan Williams and Martin Shaw, and first published in 1928. In the fascinating preface to this volume, copies of which will be found in almost every church choir library in the English speaking world, Percy Dearmer writes:

Carols are songs with a religious impulse that are simple, hilarious, popular and modern. They are generally spontaneous and direct in expression, and their simplicity of form causes them sometimes to ramble on like a ballad. Carol literature and music are rich in true folk-poetry and remain fresh and buoyant even when the subject is a grave one.

The word carol derives from a ring dance. Much of the music of the western tradition derived from dance and many of our traditional carols are early examples of that. Some of our earliest carol words date from around 1400. One by Chaucer is included in the Oxford book. An important feature of the carol was that it was an opportunity for the common people to join in a statement of their faith. Like the mystery plays here was religious expression that wasn’t left to the priests to direct. So the development of carols in England runs alongside developments like the York, Chester and Coventry mystery plays.

Darke: In the bleak midwinter   COLCD 106

Carter: Tomorrow shall be my dancing day  YORK CD 169