And the winner of the New Zealand Community Trust Chamber Music Contest for 2016 is: Yerevan Trio.

It is the first time a Hamilton group has won the contest in known history. Yerevan Trio received the Arthur Hilton Platinum Award and the Wallace Foundation Prize of $6000. 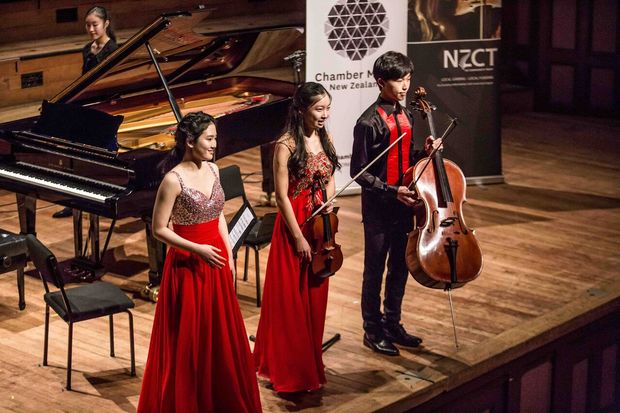 Trio pianist Marianna Kang (16) said they were very happy with the win. “It’s been an amazing experience and I think that this was the best performance we had ever given in front of an audience. We took on board the feedback from the adjudicators after the semi-final and I think that really made the difference."

Listen to all the ensembles' performances at the semi-final and the final.

Listen to the members of the Yerevan Trio talk to Clarissa Dunn after their win.

The National Finals were adjudicated by NZTrio and British clarinettist Julian Bliss. NZTrio cellist Ashley Brown said  the judging decision was based solely on the performances at the National Final.

“Yerevan Trio presented a very assured performance and a strong sense of musical intent. We had a long discussion about all the finalist ensembles and when we looked at the criteria we had set, we had a clear winner.”

“There can be no more inspiring sight than three or four young people really focusing on producing something excellent together, where the endeavor involves individual skill and commitment applied to a common goal”.

From over four hundred entries nationwide, ensembles from Auckland, Hamilton, Wellington, Christchurch and Whangarei have secured the twelve finalist spots. This year’s judges are British virtuoso clarinettist Julian Bliss, with NZTrio. The winner will be announced at the end of the concert on Saturday.