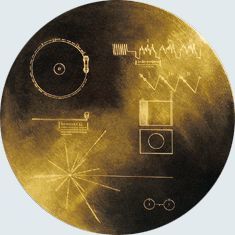 When NASA realized that the Voyager space probes being launched in 1977 would eventually travel beyond the edge of our solar system, they decided to include some kind of message to any intelligent aliens who might one day find them.

A committee headed by astronomer Carl Sagan made the selection which includes a wide variety of music, spoken greetings in 55 different languages (including some that are very obscure or long extinct) and samples of Earth's nature sounds. They're on gold-plated copper discs, engraved much like a vinyl record album and attached to the outside of the spacecraft.

The Voyager 1 and 2 probes are now more than 13 billion miles away and still going strong.

Steve Danby decided to look at the Voyager Golden Records and the message they're taking from planet Earth.