Tim Dodd talks to pianist Georgina Zellan-Smith about her early life in South Otago and her years in London in the 1960s and 70s where she had a successful performing career and rubbed shoulders with many of the great musicians from that era. She shares a number of very engaging anecdotes. 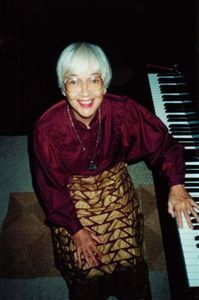 Georgina Zellan-Smith's childhood was in Milburn, south of Dunedin.

Her father was from a Shetland Islands crofter family and he became a carpenter and general handyman at the Milburn Cement works after immigrating to New Zealand.

She credits her mother for her musical ability. It was she who decided the family needed a piano in the house. The young Georgina took to it avidly from a very young age, at first tapping out tunes by ear.

After some time with a local piano teacher, Miss Pender Bryce, she started high-schooling at Otago Girls' in Dunedin and learnt from Rona Thomson, a renowned and skilled teacher.

As a teenager, Zellan-Smith became a teacher herself, taking on the overflow of Thomson's expanding book of pupils.

At the end of 1953, she went to London to study at the Royal Academy and she stayed there for most of her performing career.

She gave recitals several times at Wigmore Hall, performed with the London Philharmonic Orchestra, recorded for the BBC, and engaged in masterclasses with Alfred Cortot, Geza Anda, Guido Agosti, and Nadia Boulanger.

She recounts in the interview: "I have to share with you my amazing, wonderful life because it has been. And these people I've met – and I'm name-dropping now – but these people were so important to me. They were all unusual; there were all different. They had a heap of integrity. I don't want to sound a snob, but I was amongst people - I can only say they were star quality. I was a very privileged person is all I can say."

She returned to New Zealand eventually and in retirement would still be involved in various ways in the development of young musicians.

In 2009, she became a Member of the New Zealand Order of Merit (MNZM) for services to music.

"What a character Georgina was - and what a wonderful musician too! She was supportive of everyone and had tremendous love, knowledge, energy, and good humour to share." ~ Australian pianist and pedagogue, Piers Lane.